It remained for Keynes to construct a satisfactory theory of the determinants of income. It is a general theory which can explain the determination of output and prices in less- than-full employment and full employment situations. Keynes’ income theory of money includes – (a) income expenditure approach, and (b) saving investment approach.

Basically, these two approaches are identical and convey the same meaning:

Main propositions of Keynes’ income-expenditure theory of money are given below:

Money income (Y) is defined as the total income received by the factors of production in the form of rent, wages, interests and profits during a period. It represents money value of aggregate real output during that period. Real income (O) refers to the total volume of goods and services produced by the community during a period. In this way, money income and real income are the two sides of the same coin.

Money value of real income i. e., real income (O) multiplied by the prices level (P) is the money income. The nature of the productive process in a capitalist economy is such that, when it increases output and employment, it also generates money income sufficient enough to buy the output at the current prices.

2. Prices (P) are determined by the Ratio of Money Income (Y) and Real Income (O):

People spend their income on consumer goods and the balance, if any, is saved. Saving is that portion of income which is not consumed (S = Y – C); it is nothing but unconsumed output.

Real income or output depends on the availability of real resources and their employment in the productive processes. In an economy that level of output is produced and that quantity of labour is employed which is the most profitable. The most profitable output and employment level depends on aggregate demand or total expenditure on goods and services. Aggregate supply (AS) adjusts itself to aggregate demand (AD).

7. Money Income is the Strategic Variable determining Output and Prices:

Now, there are three possibilities:

(a) If the production is perfectly elastic, the increase in aggregate demand will raise the level of output and employment without affecting the price level,

(c) If the production is perfectly inelastic, i.e. it cannot be increased further due to full employment of resources, the increase in the aggregate demand will proportionately increase prices without affecting production of the economy.

An increase in the flow of total expenditure on final goods and services will necessitate an increase either in money or in its velocity or in both. It is like saying that, if a man grows fat, he will require a larger belt. But, according to the quantity theory, if you first arrange a large belt, you will in consequence of this action necessarily grow fat.

Whether increased money supply leads to an increase in expenditure depends upon many in between links such as, (a) the interest elasticity of the investment function, (b) the sensitiveness of the consumption function to shifts in the rate of interest, and (c) the interest elasticity of the liquidity preference function. Ultimately the role of a money depends upon what part does money play in income determination.

Thus, the income theory of money leads to two conditions:

(i) It is the money income and the volume of expenditure, and not the money supply, that determines the price level (or the value of money) and output.

(a) If the output is perfectly elastic, the increased expenditure will proportionately increase output without changing the price level.

(c) If the output is perfectly inelastic, the increased expenditure will proportionately increase prices leaving the output unchanged.

Keynes’ saving-investment equality can be visualised in two ways:

But aggregate income (Y) is either spent on consumer goods (C) or saved (S),

Thus, it is clear that by definition, investment is equal to the total expenditure on goods other than that on consumer goods (I = Y – C). Similarly, saving is defined as the excess of income over consumption expenditure (S = Y – C).

The accounting equality of saving and investment is of little analytical use partly because it throws no light on the causal factors that determine saving, investment and income and partly because it provides the condition that must be fulfilled in order to reach the general equilibrium of the economy, but tells nothing about how this condition is fulfilled. Since, saving and investment decisions are taken separately by households and firms and with different motives, one fails to understand how these decisions are reconciled.

In Figure 1, saving schedule (SS), which indicates various amounts of saving corresponding to different levels of income, is a positive function of income { S = S (Y) }. Similarly, investment schedule (II), which indicates the various amounts of investment corresponding to different levels of income, is also a positive function of income {I = I(Y)}. There is a unique level of income (Rs. 40 crores or OY) at which saving (Rs. 4 crores or EY) is equal to investment (Rs. 4 crores or EY). This is also the equilibrium level of national income. 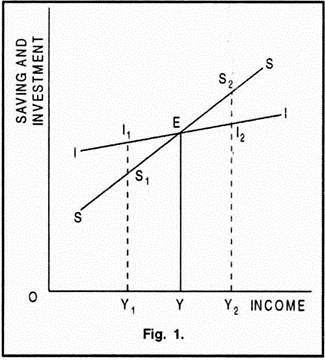 In actual practice, both saving and investment are influenced by such a large number of factors, that lags in the adjustment of the two are bound to exist and therefore it is very difficult to state a clear- cut mechanism effecting the equilibrium between the two.

A Dynamic Model of Saving-Investment Equality:

The equilibrium between saving and investment as brought about by changes in the income through time can be understood with the help of an equation model:

The equality between saving and investment (S = I) has been derived with the help of the general equilibrium condition of income expenditure equality (Y = C + I). The equilibrium level of national income (Y = C + I) is determined by the point of intersection of the aggregate demand function and aggregate supply function (AD = AS), called effective demand. Thus, S = I is the same thing as

Y = C + I and the saving and investment approach and the income and expenditure approach are identical. This is shown in Figure 2. 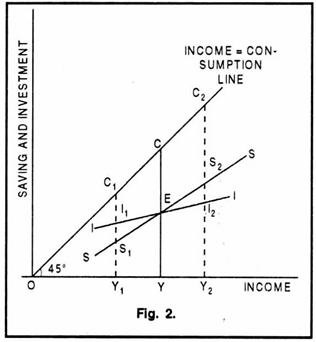 At the equilibrium level of income, S = I or Y = C + I, the output and the price level in the economy tend to be stable. But saving and investment decisions are made by diverse groups of people and with different motives. Thus, there is every possibility of saving-investment disequilibrium taking place in the economy.

During depression, as a result of the expansion of investment, employment of idle resources and money income for the people will increase. There will be some increase in prices but it will not be a steep rise because of a simultaneous increase in output. Once full employment is reached, the prices will rise in proportion to the rise in money supply.

But the saving-investment disequilibrium will not last long. When income rises as result of investment exceeding saving, saving being a function of income also starts rising. This reduces the gap between investment and saving and once again saving- investment equality is achieved. This new equilibrium is at higher levels of income, output, employment and prices. 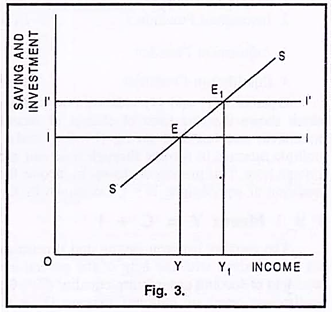 Excess of saving over investment may arise in two ways:

(i) According to Keynes, saving function remaining unchanged, the excess of saving over investment is the result of a sudden fall in the marginal efficiency of capital unaccompanied by proportional fall in the rate of interest. This generally happens during the boom period of the trade cycle. The excessive saving results in a decline in the expenditure on consumer and investment goods. The demand and the prices of the consumer goods fall. The actual profits of the producers fall short of the expected profits.

(ii) Investment function remaining unchanged, the excess of saving over investment is the result of an upward shift of saving function. In this case too, the new equilibrium will be at a lower level of income and prices. In Figure 4-B the original a saving-investment equilibrium is at point E with an income of OY. Excess of saving over investment is represented by a shift in saving curve from SS to S’S’. The new equilibrium is established at point E1 with a reduced income of OY1. Thus, whenever saving exceeds investment it initiates a process of cumulative decline in income, prices and economic activity. It is in this sense that Keynes regarded saving as a private virtue but a public vice.

(a) If saving and investment are in equilibrium (S = I), the price level will tend to be stable.

(b) If investment exceeds saving, the price level will rise,

(c) If saving exceeds investment, the price level will fall.