The effects of import quotas can be discussed with the help of Fig. 16.1. In this figure, S0 is the foreign supply curve under free trade and it is perfectly elastic. S1 is the domestic supply curve which slopes positively. D is the demand curve for the given commodity and it slopes negatively. The quantity demanded and supplied of the given commodity is measured along the horizontal scale and price is measured along vertical scale.

In the conditions of free trade, the quantity supplied is OQ and the quantity demanded is OQ1. The excess of demand over supply is met through the import from abroad. 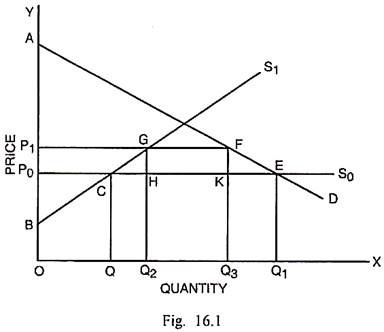 Import quota is the direct physical limitation of the quantity of the given commodity imported from the foreign country. The enforcement of import quota restricts its availability in the home market and creates shortage and consequent rise in its price. Originally, the price of the commodity was Po and the quantity imported amounted to QQ1. The government of the home country fixes the import quota to the extent of Q2Q3.

The initial total supply in the home market, made up of OQ as the domestic output and QQ1 as the import, amounted to OQ + QQ1 = OQ1. After the enforcement of import quota, the total supply is OQ3 out of which domestic production is OQ2 and import quota is Q2Q3 (OQ3 = OQ2 + Q2Q3). It signifies a shortage of the commodity compared with the original situation. As a consequence, given the supply OQ3 and demand curve D, the price rises from P0 to P1. This rise in the price of the commodity is the price effect of import quota.

In such an event, the revenue effect is either captured by the domestic importers or foreign exporters, or shared between the domestic importers and foreign exporters in some proportion. It is, therefore, not easy to quantify exactly what the revenue effect of import quota will be and to which group or groups will it accrue and in which proportion.

The gain is producer’s surplus amounts to P0CGP1. If importers are organised, an amount equal to the revenue effect GHKF will accrue to them. Consequ­ently, the net loss to the community will be P0EFP1 – (P0CGP1 + GHKF) = ΔGCH + ΔFKE. If the revenue effect neither accrues to the government nor to the importers, the redistribution effect will involve a large net loss in welfare. In this case, the net loss in welfare will amount to P0EFP1 – P0CGP1 = GCEF.

One of the objectives of enforcing import quota is to reduce the balance of payments deficit by restricting imports. That portion of national income going into imports can be utilised for investment in the import- substitution or export industries. The expansion in exports, coupled with restriction of imports is likely to bring about improvement in the balance of payments position of the country.

According to Fig. 16.1 the quantity imported under free trade conditions at the price P0 is QQ1 and the total value of imports is QCEQ1. In case, the government prescribes the imports quota as Q2Q3, the physical quantity imported has been slashed.

Since price of imported commodity rises to P1, the value of imports is Q2GFQ3. If the government auctions the import licenses, its revenue receipt is GFKH. Alternatively, if the importers are organised, the gain due to higher price in the form of additional profit can be obtained by them. In either of the case, there can be saving of foreign exchange of the size of GFKH and actual payment to foreign country is Q2HKQ3 which is less than the payment QCEQ1 for imports under the free trade. Thus import quota brings about a reduction in the balance of payments deficit. 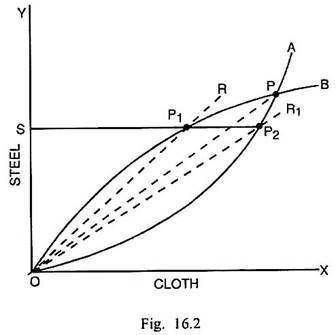