Under the barter system buyers and sellers of commodities had to face a number of difficulties. In ancient times the drawbacks of barter caused people to use a ‘go-between’ or money, which made buying and selling much simpler. Surplus goods were exchanged for money which, in turn, was exchanged for other goods (that were needed).

Some peculiar things were used before money came into use. Any­thing in common use and having intrinsic value (considered to be valuable for its own sake) served as money. For example, grain, cattle and salt were widely used as money.

However, the use of commodities as money has drawbacks. Firstly, cattle vary in size and quality. It is not easy to carry them around for the settlement of debts. Secondly, they are too large for making small purchases. Thirdly, they are not durable assets because their value is reduced sooner or later by disease, age and death.

Use of Precious Metals:

In view of the above disadvantages, metals—gold and silver —came into use as money. They did not suffer from any of the disadvantages of commo­dities. Moreover, both were easily worked into manageable small pieces that would serve for everyday dealings. Coins were the natural next stage in the evolution of money.

It is widely believed that Greeks were the first people to make coins, that is, standard units which could be easily counted. In old societies coins were worth what they weighed. For example, a silver coin which contained 10 oz. of silver was worth the current market value of 10 oz. of the metal. Thus money had an intrinsic value as metal.

The first paper money was the bank note deve­loped by the goldsmith bankers in the second half of the 17th century. Its significance lay in the fact that its value depended not on its intrinsic worth as paper but on the credit of the banker who issued it.

As soon as paper currency became widely acceptable there was no need to maintain a coinage of intrinsic value. Gold coins were used for quite some time, but, for various reasons, went out of use in 1914. However, silver coins were minted from an alloy called cupro-nickel.

Thus the currency, both notes and coins, is now entirely a token one. The implication is simple the paper or metal is not worth the value printed or stamped. Each has a face falue, i.e., value which is written on the face of a coin or currency note. This face value is likely to be quite different from its intrinsic value.

The final stage in the deve­lopment of money has been the use of bank deposits as money. For a long time cheques have taken place of notes and coins for the major proportion of commercial transactions. A cheque is basically a short-term credit ins­trument. In the strict sense of the term, a cheque is not money. But an individual’s deposit in a commercial bank is no doubt money. A cheque is just a written instruction.

A cheque is simply an order from the owner of a bank deposit to a banker to transfer a stated sum to a person named on the cheque. The banker carries out this instruction by reducing the deposit of the drawer and cre­diting the account of the payee.

Thus the five main stages in the historical development of money have been as follows:

(a) Commodities which are generally accep­table

(c) Predetermined weights of metal in the form of coins

Some usual type of money that have been used at different times and in different places are shown in Table 19.1. 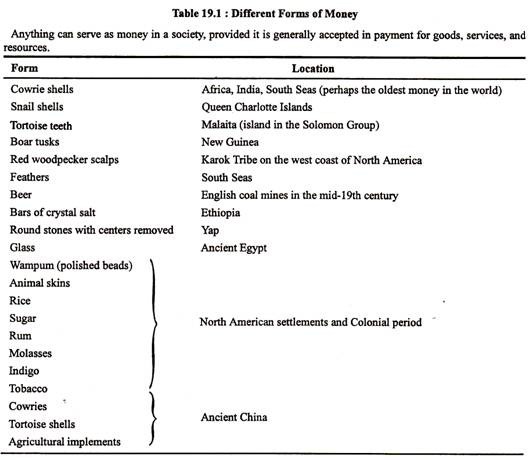 It is often said the money is what money does. This expression means that anything which performs the functions of money — viz., medium of exchange, a unit of account standard of deferred payments and a store of value — can be called money. If a note printed on paper performs all these functions, it must be called money.

As noted earlier many different commo­dities over the years and in different societies have been recognised as money. Such objects are shells, sharks’ teeth, cattle, salt and, of course, gold and silver. They all have at least one thing in common. When they were used as money they were generally accepted, that is most people in that society would accept them in payment for goods and services.

It must be noted that the thing which per­forms the functions of money must be accep­table by everybody. If it is not so accepted it cannot be called money. In modern times, the laws of a country prescribe what kinds of coins or notes must be accepted by the people in repayment of debts.

Such coins and notes are called legal tender money. Today our cash — the notes and coins — have no value in themselves. They are almost worthless but, by law, people must accept them in payment for goods and services because they are legal tender.

Legal tender is any means of payment which must be accepted by law in settlement of a debt. In our country the Reserve Bank of India notes and coins are legal tender. Anyone selling goods and services must accept these notes and coins in payment.

Thus, money can be defined in the following way:

Whatever is generally accep­ted as a medium of exchange and for the repayment of debts can be called money. Accounts are kept in terms of such money. Savings are also kept by the people in the form of such money.

We accept notes simply because they are recognised by law (as legal tender) and we know that they are similarly accepted by all other people throughout the country. In the same way, we accept coins, manufactured by the Mint, at a face value (stamped on them) far greater than their intrinsic value (in metal).

The money now used in India and most other countries consists of currency notes and coins in circulation with the public and bank deposits.

Notes are printed by the Reserve Bank of India. Coins are manufactured by the Mint. Both notes and coins are known as token money because the material in them is worth far less than the value stated on them. The quantities issued are controlled by the R.B.I. and adjusted from time to time according to the needs of the community.

R.B.I, notes and coins are legal tender— that is, money which the law requires people throughout the country to accept as a means of payment. Thus, a shopkeeper may refuse a cheque but cannot refuse notes in payment for goods on display. Coins are legal tender up to limited amounts. Larger amounts of small change may, of course, be accepted but the law gives the right to refuse. R.B.I, notes are unlimited legal tender and must be accep­ted in any quantities.

Though not legal tender, cheques based on bank deposits are accepted throughout the community as the normal means of making large payments. Bank deposits, therefore, come within the definition of money. A narrow defi­nition excludes deposit accounts which cannot be transferred by cheque but the more widely used definition includes both current and deposit accounts.

In defining money, a distinction must be made between bank deposits or accounts and the cheques drawn upon them. A cheque is an instruction to a bank to pay a stated sum of money out of a deposit in cash or transfer it into the deposit of another person named on the cheque. The cheque itself is not money but represents a sum of money in a bank deposit and is a means by which ownership of that money is transferred from one depositor to another.

In an advanced society with a developed banking system, bank deposits are the main form of money. They are convenient to hold arid, through cheques, can be easily and safely transferred in quantities of any size. For ex­ample, they avoid the expense and risk of robbery involved in large movements of notes. The advantage of making wage payments by cheque explains why many large firms en­courage their employees to hold bank accounts.

It is common practice for a cheque to be crossed (with two parallel lines at the top left corner) requiring it to be paid into a bank account and not cashed directly over the counter.

In order to carry out the functions outlined above, whatever serves as money must possess certain qualities?

These are the following:

Money must be portable or easily carried about. It would be very difficult to use anything large and bulky as money.

Money must be able to be divided into smaller amounts to enable small purchases to take place. The use of large goods or animals would not facilitate divisibility.

Money must last a long time. It must not die, wither away or be easily defaced. Anything which is alive or perishable would not be a very good form of money.

The value of money should not fluctuate wildly.

The commodities used as ‘go-between’ in early times (for example cowrie shells) were unable to satisfy these requirements. Shells vary in size; they are easily damaged; large payments require much counting and carrying; and they are too easy to find. Other commo­dities have similar drawbacks.

The precious metals, silver and gold, posse­ssed the necessary qualities and so they superseded other things as money.

(a) acceptable to people in many countries;

(d) Easy to carry about;

(e) limited in supply (or scarce) when they were coined,

(f) all the pieces were the same or uniform (e.g. each 50 p. coin should be the same as any other 50 p. coin). Even today, gold still serves as the international standard of value. In fact, acceptability is the only essential requirement for a particular item to be used as money.