In this article we will discuss about the equilibrium of a multiproduct firm, explained with the help of suitable diagrams.

Introduction to Equilibrium of a Multiproduct Firm:

Let us consider the simplest case of a multiproduct firm in which a firm uses a single input X for the production of two goods, viz., Q1 and Q2.

The firm’s production function in implicit form can be written as:

where q1, q2 and x are respectively the quantities of Q1, Q2 and X.

(8.163) gives us the cost of production, in terms of input quantity x, as a function of the output quantities q1 and q2.

Now, the firm may use many different combinations of q, and q2 by using a particular quantity of input X. The curve that connects these (q1, q2) combinations is called the product transformation curve (PTC). The equation of the PTC for x = x0 = constant is

Let us now state the assumptions upon which we shall base further discussions of the model.

(i) The firm is a profit-maximiser. That is why marginal products (MPs) of input X in the production of both Q) and Q2 should be positive.

(iii) The product transformation curves (PTCs) that would be obtained for different values of x, are negatively sloped and concave to the origin as have been shown in Fig. 8.28. This implies that (8.163) is regular strictly quasi-convex. The slope of a PTC has been assumed to be negative, for a particular quantity of input X may produce more (or less) of Q| only when it has to produce less (or more) of Q2. 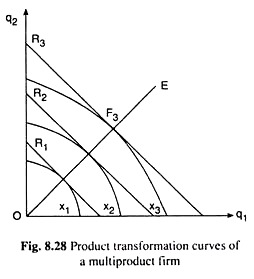 The numerical slope of a PTC at any point on it, is called the marginal rate of product transformation of Q2 into Q1 (MRPTQ1,Q2) at that point.

The PTCs have been assumed to be concave to the origin because it has been observed empirically that as the firm goes on transforming Q2 into Q1, i.e., as it moves downward towards right along a PTC, the MRPTQ1,Q2 or the numerical slope of the curve increases. In accordance with the definition of MRFT given above, we may write

Since dx = 0 for movements along a PTC< we have

That is, the MRPT at a point on a PTC equal the ratio of the MCs of the two goods (Q1 and Q2) in terms of X.

Alternatively, MRPT can be expressed in terms of the marginal products (MPs) of input X.

The inverse-function rule gives us

That is, the MRPTQ1,Q2 equals the ratio of the MPs of input X in the production of Q2 and Q1.

Types of Equilibrium of a Multiproduct Firm:

If the entrepreneur sells his goods, Q1 and Q2, at fixed prices p, and p2, his revenue (R) equation would be

If the entrepreneur specifies the amount of revenue that he wants to earn as, say, R = R0, his revenue equation (8.171) would become

which may be considered to be his iso-revenue equation. This equation would be represented by a straight line of slope = p1/p2 negative, and the horizontal and vertical intercepts of this line would be R0/p1 and R0/p2, respectively. We have shown three such iso-revenue lines for R = R1, R2 and R3 in Fig. 8.28. They are parallel straight lines, given the prices of the goods.

then, to derive the conditions for such maximisation, we have to form the relevant Lagrange function:

Where λ is an undetermined Lagrange multiplier.

The first-order conditions (FOCs) for constrained revenue maximization are

The FOC for constrained revenue maximisation as given by (8.177), therefore, tells us that MRPT must be equated with the fixed price ratio. Geometrically, since MRPT is the numerical slope of the product transformation curve (PTC) and is that of the iso-revenue lines, constrained revenue maximisation occurs at the point of tangency between the given PTC and an iso-revenue line.

The FOC may also be written as

It may be noted here that, if pi and p2 are given and constant, then MRPX and VMPX would be identical in the production of each good. Let us now come to the second-order condition (SOC) for constrained revenue maximisation. This condition states that the relevant bordered Hessian determinant be positive, i.e., 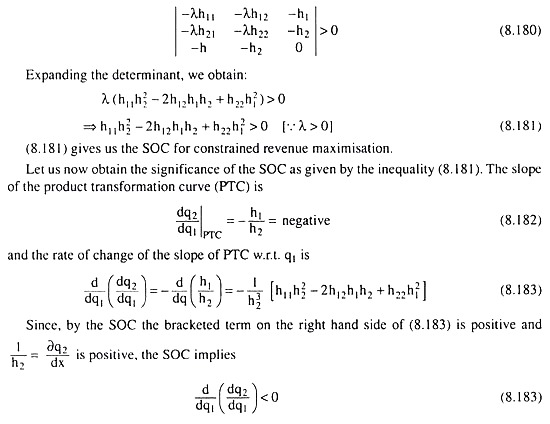 which implies that the derivative of the numerical slope of PTC, i.e., derivative of –(dq2/dq1) w.r.t. q1 is positive, which, in its turn, implies that the PTC is concave to the origin at the point of tangency where the FOC has been satisfied. Since we have already assumed PTCs to be concave to the origin, the SOC may be considered to have been satisfied here.

We have so far assumed that the firm wants to maximise revenue subject to an input constraint. But it may be the other way round. That is, the firm may decide to minimise its use of input X subject to a revenue constraint.

In this case, the firm’s iso-revenue line would be specifically given and the firm would want to remain at that point on the line where it would reach the lowest product transformation curve (PTC), or, where the minimum amount of input X would be used.

Here also, the firm would achieve optimisation at the point of tangency between the given iso-revenue line and a PTC, and here also, the FOC and the SOC would be the same as those in the constrained revenue-maximisation case.

If the PTCs are strictly concave to the origin, every point of tangency between an iso-revenue line and a PTC represents a solution of both a constrained revenue-maximisation and a constrained input-minimisation problem. If we join all such points of tangency and the point of origin, O, by a curve (like OE in Fig. 8.28), then this curve would give us what is known as the firm’s output expansion path.

In this model, the firm’s profit (π) function would be obtained as

Here pi and p2 are the given prices of Q1 and Q2 and r is the given price of input X. The FOCs for maximum profit would be obtained if we set the partial derivatives of π w.r.t. q1 and q2 equal to zero. Therefore, the FOCs are

Let us now come to the second-order conditions (SOCs) for profit maximisation.

These conditions require that the principal minors of the determinant: 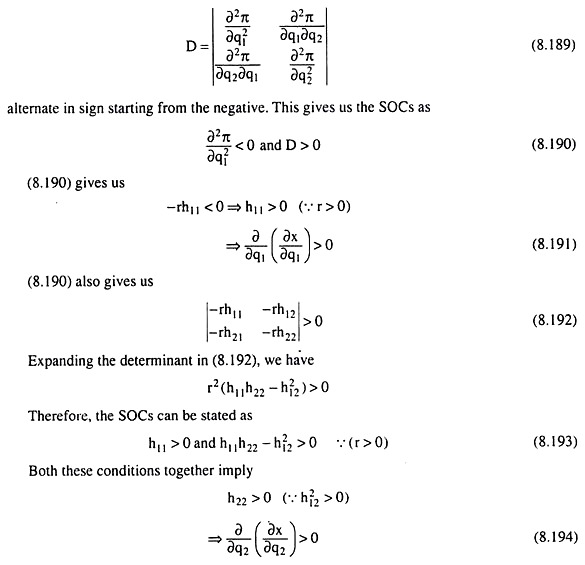 The SOCs (8.191) and (8.194) for profit maximisation give us that the MCs of both the goods, ∂x/∂q1 and ∂x/∂q2 and rise as q1 and q2 increase respectively. In other words, the MC curves of both the goods should be upward sloping towards right.

SOCs (8.193) require that the production relation (8.163) be strictly convex in the neighbourhood about a point at which the FOCs (8.188) are satisfied. If (8.163) is strictly convex throughout, any maximum achieved will be a global maximum.