The Problem of Scarcity:

We live in a world of scarcity. People want and need variety of goods and services. This applies equally to the poor and the rich people. It implies that human wants are unlimited but the means to fulfil them are limited. At any one time, only a limited amount of goods and services can be produced. This is because the existing supplies of resources are extremely inadequate. These resources are land, labour, capital and entrepreneurship.

These factors of production or inputs are used in producing goods and services that are called economic goods which have a piece. These facts explain scarcity as the principal problem of every society and suggest the Law of Scarcity, The law states that human wants are virtually unlimited and the resources available to satisfy these wants are limited.

The Problem of Choice:

For instance, the more roads a country decided to construct the fever resources will there be for building schools. So the problem of choice arises when there are alternative ways of producing other goods. The sacrifice of the alternative (school buildings) in the production of a good (roads) is called the opportunity cost.

There are a number of problems that can arise from choices that are made by people, whether they are individuals, firms or government. Choices or alternatives (or opportunity cost) are illustrated in terms of a production possibility curve.

A production possibility curve shows all possible combinations of two goods that a society can produce within a specified time period whose resources are fully and efficiently employed.

PP1 is the production possibility curve in Fig. 1 which shows the problem of choice between two goods X and Y in a country. Good X is measured on the horizontal axis and Good Y on the vertical axis. PP cue shows all combinations of X and Y good that can be produced by the country with all its resources fully and efficiently employed. 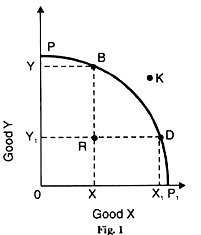 The PP1 curve is downward sloping because to produce more of good X involves producing less of Y good in a fully employed economy. Moving from point В to D on the PP{ curve means that for producing XX, more quantity of good X, YY quantity of good Y has to be sacrificed.

Central Problems of an Economy:

The resources are scarce; the society has to make a number of choices.

There are fee main categories of choices that a society must make:

1. What to goods and services produce and in what quantities?

2. How to produce these goods and services?

3. For whom to product them?

4. How efficiently are the resources being utilized?

5. Is the economy growing?