In this article we will discuss about the law of diminishing marginal utility. Also learn about whether Marginal Utility (MU) diminishes with an increase in the stock of a commodity or not.

Utility simply means the capacity of a commodity to satisfy a given desire. When we say that a commodity has high utility, all that we mean is that it is intensely desired by somebody who is prepared to pay a high price in exchange for it.

The Law of Diminishing Marginal Utility:

This tendency towards diminishing utility from successive units of the same commodity is operative in all branches of consumption. The rate of diminution may be slow for some commodities, or rapid for others, but the tendency is still present, and a point will come when further units of the commodity would yield no utility at all.

This generalisation is known as the law of diminishing marginal utility, which has been stated by Marshall thus:

“The additional benefit which a person derives from a given increase of a stock of a thing diminishes with every increase in the stock that he already has.”

Utility can only be measured indirectly through the price that a man is willing to pay for the commodity. Stating the law in terms of prices, then, we may assume that a person will be just willing to pay Rs. 500 for one pair of shoes. The sum then measures the utility of one pair of shoes to him. The second pair obviously yields less satisfaction than the first, and hence, for it he will offer less money, (say) Rs. 400. This sum measures the utility of the second pair to him.

For the third pair, he will, according to the same reason, lower his offer further, say to Rs. 300. Then, this sum measures the utility of the third pair. In this way, as he goes on purchasing more shoes, he will offer lower and lower prices, until a point will come when he will refuse to buy any more shoes.

We may then state the law in the following way:

“At any given time the marginal utility of any commodity to its owner decreases with every increase in the stock of that commodity.”

“The satisfaction acquired from addi­tions to one’s stock of a good diminishes.”

The law may be graphically represented in this way. On the horizontal axis (Fig. 2), we measure the units of commodity (shoe) and on the vertical axis we measure the price that a man is willing to pay for the different pairs of shoes. For OA pair of shoes the consumer will pay AA’ price, for AB pair he will pay BB’ price, because the utility of the AB pair will be less than that of OA pair of shoes. 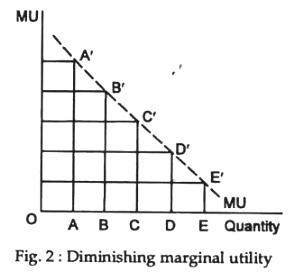 Similarly, for BC pair, he will pay CC’ price; for CD pair DD’ price; the latter becoming less and less as he purchases more and more pair of shoes. As Marshall put it, “The larger the amount of a thing that a person has, the less, other things being equal, will be the price which he will pay for a little more of it : or in other words, his marginal demand price for it diminishes off. A curve joining the points A’, B’, C, D’ will present the law of diminishing marginal utility, and will have a negative slope”.

The law of diminishing marginal utility is based on various assump­tions.

The following are the most im­portant:

(1) The utility that a consumer de­rives can be measured and expressed in quantity. Moreover, the units of the commodity consumed must be properly defined so that they have relevance.

(2) The price that a consumer is willing to pay for a commodity indicates its marginal utility to him.

(3) There will be no change in the taste, preference, fashion or buying habit of the consumer in the course of purchases.

(4) The initial level of consumption is quite sufficient to yield full satis­faction to the consumer.

The following are the important causes of diminishing marginal utility:

1. Satiety of a particular want:

No doubt, human wants are unlimited and cannot be fully satisfied. But, human experience has demonstrated that a particular want can be satisfied. As a consumer gets more and more units of a commodity, his inclination or psychological capacity to consume more and more units of it gradually diminishes and so the marginal utility from the successive units becomes gradually less and less.

In other words, with an increase in consumption of a commodity the keenness for its consump­tion or possession gradually becomes weaker and weaker. This means that too many units of same commodity bring psychic satiation. A consumer may not like to consume a commodity beyond a certain level.

The validity of the law of diminishing marginal utility can be established through introspection (i.e., an examination of one’s own thought or mental reaction). The classical economists used to look into their own minds to assess their own psychological reaction to the extra consump­tion of a particular thing (say, an apple, an orange, an ice cream, a chocolate, etc.) and found the truth of the law. These findings of introspection are now strengthened by studies of consumer’s psychology. These are parts of various market surveys carried out by modern companies.

In the opinion of W.D. Watson, marginal utility diminishes because a person having several units of a commodity, with alternative uses, puts one unit to its most important use and the additional units to the successively less important ones.

Fourthly diminishing utility is an expression of the ‘variety is the spice of life’ philosophy of most individuals—that people prefer to have one or few of a lot of different goods and services rather than a great many of only a few goods and services.

The law is not universally applicable. In other words, it may not operate in certain circumstances and in those exceptional situations the marginal utility of a thing will increase for the time being.

The following are a few exceptions to the law:

The phrase, “at any given time”, points to an important qualification. If we take a certain period of time into consideration, the consumer’s habits of tastes may change in the meanwhile. Hence, it is no exception to the law to say that the more good music a man hears the greater is his desire for music, or the more a man drinks the greater is his desire for additional drink.

For, in the meantime, the consumer’s habits or tastes have been altered. We must assume a period of time suitable to each occasion. It still remains true that at any given moment, given the consumer’s tastes and habits as fixed, the successive units will yield smaller satisfaction than before.

Similarly, we must take the units to be of suitable amounts. If we take the earlier doses to be very small, the marginal utility may rise at first, instead of falling. A very short holiday might not fully recuperate and soothe a man’s work-worn faculties; while another holiday of double duration would yield more than double utility in soothing his nerves. Hence, we must take units to be of reasonable and adequate amounts.

3. Difference in quality of products:

There are certain groups of com­modities, the marginal utility of which does not diminish with every in­crease in the stock of them. The collector of stamps may desire additional units of stamps with increasing intensity. But, according to Jacob Viner, this is a limitation, if we take a complete set as the proper unit of observation. For example, if there exist two pearls of the same type, these two should be taken as one unit. The addition of pearls of the same type to this unit will yield diminishing utility.

4. Stock with other persons:

Similar is the case with fashion or style; given the extent of the use of one commod­ity, the utility of additional units to an individual diminishes. For example, if the number of telephone-users remain fixed, an additional set of telephone will yield less satisfaction to the same person than the first set. Similarly, if in a locality all but one have two cars, the second car to that man will not yield diminishing utility.

5. Change of taste and preferences:

If the consumer’s taste changes so that he likes a commodity more, the marginal utility of any quantity of the commodity will rise. A person cannot have initial interest in eating eggs. But, after taking one egg, he may form a good taste for it and get more and more satisfaction from the 2nd, 3rd, 4th and subsequent units.

Sometimes, people buy certain things without making any rational calculation. Someone may go to a fancy market and purchase something which suddenly catches his eyes. The marginal utility of such a commodity does not diminish when a buyer purchases it in larger quantity out of sheer emotion or fancy.

A miser gets a greater satisfaction from the additional collection of money. Similarly, a person gets more and more satisfaction as his hobby collections, e.g., stamps, coins, etc. increase gradually.

In spite of these limitations, which are of no great importance, the tendency shows itself so widely and with so few exceptions that we can speak of it as universal. The law is important on the ground that it forms at the basis of the law of demand and provides an adequate reason for the negative, i.e., downward slope of the demand curve.

By reallo­cating a commodity, in this way, it is possible to increase the aggregate utility of the commodity and maximise social welfare (which is measured by the net gain to all members). In this case, the gainers gain more than the losers lose. So, society as a whole is surely better off.