Decision making is crucial for running a business enterprise which faces a large number of problems requiring decisions.

The five steps involved in managerial decision making process are explained below:

But the objective of a public enterprise is normally not of maximisation of profits but to follow benefit-cost criterion. According to this criterion, a public enterprise should evaluate all social costs and benefits when making a decision whether to build an airport, a power plant, a steel plant, etc.

In regard to this, various hypotheses can be developed which will become alternative courses for the solution of the problem. For example, in case of the problem mentioned above, if it is identified that the problem of declining profits is due to be use of technologically inefficient and outdated machinery in production.

The two possible solutions of the problem are:

(1) Updating and replacing only the old machinery.

The choice between these alternative courses of action depends on which will bring about larger increase in profits.

The next step in business decision making is to evaluate the alternative courses of action. This requires, the collection and analysis of the relevant data. Some data will be available within the various departments of the firm itself, the other may be obtained from the industry and government.

The data and information so obtained can be used to evaluate the outcome or results expected from each possible course of action. Methods such as regression analysis, differential calculus, linear programming, cost- benefit analysis are used to arrive at the optimal course. The optimum solution will be one that helps to achieve the established objective of the firm. The course of action which is optimum will be actually chosen. It may be further noted that for the choice of an optimal solution to the problem, a manager works under certain constraints.

The constraints may be legal such as laws regarding pollution and disposal of harmful wastes; they way be financial (i.e. limited financial resources); they may relate to the availability of physical infrastructure and raw materials, and they may be technological in nature which set limits to the possible output to be produced per unit of time. The crucial role of a business manager is to determine optimal course of action and he has to make a decision under these constraints.

However, it should be noted that once a course of action is implemented to achieve the established objective, changes in it may become necessary from time to time in response in changes in conditions or firm’s operating environment on the basis of which decisions were taken.

The five steps in the decision making process are shown in Fig. 1.2 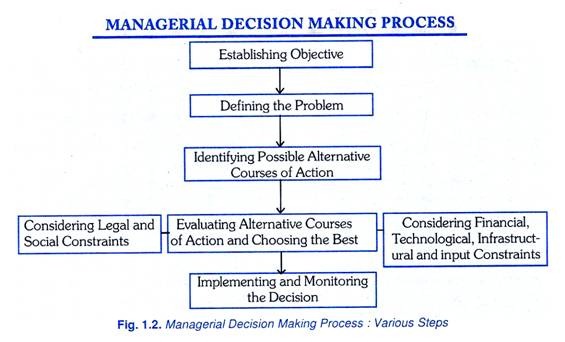