Hirschman has laid down two assumptions for the thesis of unbalanced growth as stated below:

(i) SOC and DPA should not be increased at the same time.

(ii) That path should be followed which maximizes private investment. 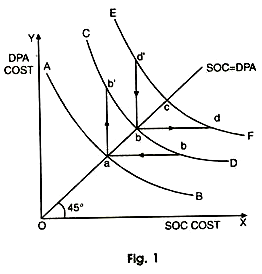 In this diagram, on the X-axis, we have taken SOC cost whereas on Y-axis, we have taken DPA cost. AB, CD and EF are isoquants or equal product curves. These curves show different quantities of DPA and SOC which give same GNP at any point. Higher the isoquant, higher will be the GNP and vice-versa. The curves are drawn in such a manner that 45 degree line through the origin connects the optimal points on the different curves. This line shows the balanced growth of SOC and DPA. In the diagram, points a, c and e are all equilibrium points where SOC=DPA.

Now path to development is followed via excess capacity of SOC then the path of development would be a b c d e. When investment is SOC increases by ab, it leads to an increase in DPA equal to ab. These types of investments will shift the equilibrium from a to c which is on CD isoquant curve which is higher than AB isoquant. It is because excess SOC will lead to forward operation of the multiplier due to which income will increase multiple times. Investment in DPA due to excess SOC will lead to the operation of accelerator. That way, there will be cumulative increases in income.

It means that investment both in SOC and DPA lead to higher level of GNP. Induced by this increase, investment in SOC will be increased by the government which would be equal to cd. This will also raise investment in DPA equal to cd’. Both types of investment would raise the equilibrium to e on EF, higher equal product curve. Thus it is clear as investment is made in SOC first, there is corresponding and automatic investment in DPA.

Out of the two paths of development, the first path of excess SOC i.e., a b c d e is very smooth path. This path is self-propelling. On the contrary excess DPA i.e., ab ‘cd ‘e’ path needs political pressure. Hirschman has rightly stated, “development via shortages is an instance of the ‘disorderly’, ‘compulsive’ sequence while via excess SOC capacity is essentially permissive.”

After evaluating the paths of economic development, now the question is for self-reliance or self-propelling. In which industries we should make investment first so as to make development effective.

In this connection, Hirschman has given linkage effect which is of three types:

Growth of a set of industries stimulates the growth of those which supply raw materials. Setting up a steel plant for example, would stimulate the demand for steel scrap, coal and other related goods. Precaution of these goods will accordingly increase. These are backward linkages.

Forward linkages refer to the growth of certain industries owing to the initial growth of those which supply raw materials. Expansion of steel industry, for example, will encourages industries making machine, tools etc., using steel as their basic input.

In short, the study of Forward and Backward linkage facilitates the choice of activities through which growth with imbalances should be generated in the system. Industries generating maximum linkages ought to be developed first. According to Prof. Hirschman, intermediate industries such as steel and coal are expected to generate maximum linkages. Thus, we can say that Prof. Hirschman maintains that, “Development via shortage is an instance of the disorderly compulsive sequences while via excess of SOC capacity is essentially permissive.” It is a way what Hirschman calls ‘self-propelling’.

Prof. Hirschman favored the setting up of last industries first. The success of imbalanced growth strategy needs a wise selection of projects in which investment is to be made first. For this purpose, a developing country may not undertake that industrial process which can itself import from abroad and assemble for final finished projects. Prof. Hirschman explains it with the help of an example. Let us suppose two projects named A and B require some capital. A has a rate of return at 20 per cent and B has 15 percent while market interest rate is 16 percent. Market considerations will prefer investment in A first.

When project A has been started, rate of return on B increases to 20 per cent and then B can also be safely undertaken. But if we had taken project B first return on A would have turned out to be 25 per cent. Hence, in spite of loss involved in initial stages, it is more profitable to undertake project B first, and A later on.

Thus, it is better to undertake last industries first. Backward linkage effects are important not only from secondary back to primary production but also from tertiary back to both secondary and primary production. Backward linkage effects are the combined result of several last stage industries in the country. Therefore, when the demand for import replacing commodities increases, it justifies domestic last stage production.

Hirschman advocates to give subsidies or protection to import replacing industries. But, it is not desirable to give infant industry protection till the industry has not been on sound footing. Thus, Prof. Hirschman calls them import enclave industries which have very significant backward linkage effects. The less developed country does not give any importance to the role played by exports in economic development. They treat them as a step child.

Consequently, the exports do not expand and fail to produce forward linkage effects within the economy. Keeping in view these facts in mind, Hirschman suggested that export promotion is the only practical way of achieving industrialization viz., import substitution. He says, “There is no real alternative between export promotion and import substitution. The former may often be the only practical way of achieving the latter.”