The below mentioned article provides an overview on the Theory of Excess Capacity.

The doctrine of excess (or unutilized) capacity is associated with monopolistic competition in the long-run and is defined as “the difference between ideal (optimum) output and the output actually attained in the long-run.”

Under perfect competition, however, the demand curve (AR) is tangential to the long-run average cost curve (LAC) at its minimum point and conditions of full equilibrium are fulfilled: LMC = MR and AR (price) = Minimum LAC. This means that in the long-run the entry of new firms forces the existing firms to make the best use of their resources to produce at the lowest point of average total costs.

At point E in Figure 5 abnormal profits will be competed away because MR = LMC – AR = LAC at its minimum point E and OQ will be the most efficient output which the society will be enjoying. This is the ideal or optimum output which firms produce in the long-run. 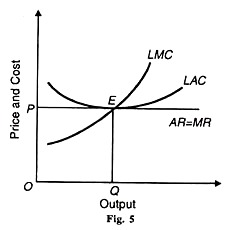 Under monopolistic competition, the demand curve facing the individual firm is not horizontal, but it is downward sloping. A downward sloping demand curve cannot be tangent to the LAC curve at its minimum point. The conditions of equilibrium LMC = MR and AR (d) = Minimum LAC will not be fulfilled.

The firms will, therefore, be of less than the optimum size even when they are earning normal profits. No firm will have the incentive to produce the ideal output, since any effort to produce more than the equilibrium output would involve a higher long-run marginal cost than marginal revenue.

Thus each firm under monopolistic competition will be of less than the optimum size and work under excess capacity. This is illustrated in Figure 6 where the monopolistic competitive firm’s demand curve is d and MR1 is its corresponding marginal revenue curve. LAC and LMC are the long-run average cost and marginal cost curves.

The firm is in equilibrium at E1 where the LMC curve cuts the MR1 curve from below and OQ1 output is set at Q1A1 price. OQ1 is the equilibrium output but not the ideal output because d is tangent to the LAC curve at A1 to the left of the minimum point E1.

Any effort on the part of the firm to produce beyond OQ1 will mean losses as beyond the equilibrium point E, LMC > MR1 Thus the firm has negative excess capacity measured by QQ1 which it cannot utilise working under monopolistic competition. 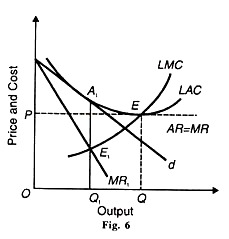 Its output is ideal and there is no excess capacity in the long-run. Since under monopolistic com­petition the demand curve of the firm is downward sloping due to product differentiation, the long-run equilibrium of the firm is to the left of the minimum point on the LAC curve.

(i) The number of firms is large;

(ii) Each produces a similar product independently of the others;

(iii) It can charge a lower price and attract other’s customers and by raising its price will lose some of its customers;

(iv) Consumer’s preferences are fairly evenly distributed among the different varieties of products;

(v) No firm has an institutional monopoly over the product;

(vi) Firms are free to enter its field of production;

(vii) The long-run cost curves of all the firms are identical and are U-shaped.

Given these assumptions, excess capacity arises when there is no active price competition despite free entry of firms in a monopolistic competitive market.

Chamberlin gives the following reasons for such a situa­tion:

(i) Firms may consider costs rather than demand in fixing prices,

(ii) They may aim at ordinary profits rather than maximum profits.

(iii) They may follow a policy of ‘live and let live’ and may not resort to price reduction,

(v) There may be the imposition of uniform prices on dealers by manufacturers,

(vi)Firms may resort to excessive differentiation of the product in an attempt to turn attention away from price cutting,

When there is no-price competition due to the prevalence of these factors, the curve dd is of no significance and the firms are only concerned with the group DD curve. Suppose the initial short-run equilibrium is at S where the firms are earning super-normal profits because the price OP corresponding to point S is above the LAC curve. With the entry of new firms in the group, super-normal profits will be competed away.

The new firms will divide the market among themselves and the group demand curve DD will be pushed to the left as D’D’ in Figure 7 where it becomes tangent to the LAC curve at point A. This point A is of stable equilibrium in the absence of price competition for all firms in the group and they are earning only normal profits. Each firm is producing and selling OQ output at QA (=OP) price. 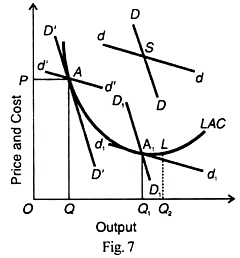 Chamberlin concludes that when over long periods under non-price competition prices do not tall and costs rise the two are equated by the development of excess productive capacity which does not possess automatic corrective.

The concept of excess capacity is of much practical significance. Prof. Kaldor has characterised it as “intellectually striking”, ‘a highly ingenious’ and ‘revolutionary doctrine.’ It demonstrates an untraditional possibility that an increase in supply may lead to a rise in price.

The ‘wastes of competition’ which were hitherto a mystery have been unfolded. They pertain to monopolistic competition rather than to perfect competition, as was wrongly implied by the earlier economists.

But each firm will be of a smaller size than under perfect competition. This entails a wasteful use of resources by bringing up firms with lower efficiency. Such firms use more manpower, equipment and raw materials than is necessary. This leads to excess or unutilized capacity.

Mostly excess capacity is due to fixed prices. But where price are not fixed, the entry of new competitors will raise elasticities of demand, lower prices and profits. If consumers’ inertia is present, prices will exceed costs and profits are not likely to fall. Thus excess capacity and superfluity of firms are bound to remain under monopolistic competition, as is the case in the present-day world.