Term Paper on the Supply of Money

Term Paper # 1. Meaning and Definition of Supply of Money:

There are three opinions regarding the definition of the supply of money:

They are as follows:

(1) Under Traditional or Narrow Approach:

This is the most traditional and narrow definition of money. According to this approach, supply of money means cash with the people and that portion of cash deposited with the commercial banks, which is demand deposit. According to this, meaning, for the medium of exchange, both the money which is available with the people in terms of currency and money deposited with the bank which can be withdrawn by cheque.

This approach of supply of money is supposed to be a narrow approach.

While defining the supply of money under this approach, Prof. Friedman said, “The supply of money in a specific time is that money in dollars which is with the public or in the form of time deposits with commercial banks.” Here any other currency for respective country can be taken in place of dollar.

Thus, according to this definition medium of exchange and store of money, both are considered as the importance of money. This is known as ‘M2‘ in America and ‘M3‘ in Britain and India. Thus M3 = Currency + Demand deposits with commercial Banks + Time deposit.

Reserve Bank has to keep gold and foreign securities worth Rs. 200 crores in Reserve Fund. Out of this gold must be valued of Rs. 115 crores. Commercial bank creates credit or supply or supply of money on the bases of demand deposit. Expansion or contraction of supply of money depends upon the monetary policy of the Reserve Bank of India.

Till April 1977, the traditional approach was adopted in India for the measurement of money, in which only currency with people and demand deposit were included. But after April 1977, Reserve Bank has adopted the new method to measure the supply of money. These four methods are the components of the measurement of supply of money, which have been defined as M1, M2, M3 and M4.

DD = Demand Deposit, deposited with the commercial bank, which can be withdrawn by cheques.

OD = other deposit, which includes:

(iii) Demand Deposits of International Financial Institutions such as IMF and World Bank. But OD certainly does not include the deposits of RBI and the deposits of the banking system of the country under RBI.

As compared to M1, this one is broader measurement of the supply of money. In this approach the savings with the post office are also included along with all the components of M1. Thus, M2 = M1 + Savings deposits with post office saving banks.

As compared of M1, M3 is also broader approach of the supply of money. In this approach along with all the components of M1 the term deposit of people with the commercial banks are included.

This is the broadest concept of the supply of money. In this approach along with all the components of M3 all the deposits with the post offices (excluding NSC) are included.

Thus among the above concepts, M1, and M2 are the narrow approach of the supply of money, whereas M3 and M4 are broader concept but there is less liquidity of money in this concept also.

M3 has a great importance among the above four measurement. On the bases of this measurement Reserve Bank publishes the data. In these days Reserve Bank gives priority to M3 measurement, because it includes currency with the public and deposits with bank, which helps to prepare the credit budget for credit policy. Chakrabarti Committee had also recommended this measurement. Thus, M3 is a standard measurement in India like the developed country.

Different components of supply of money can be shown by the following chart: 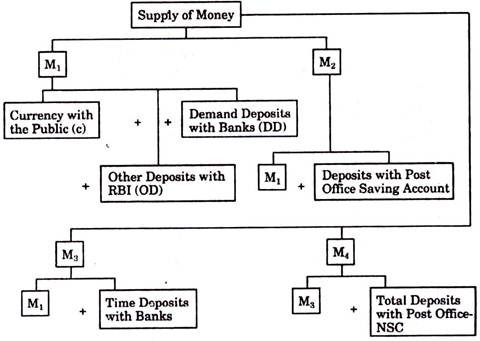 There are four approaches of supply of money in India, which are defined in context of M1, M2, M3 and M4. Among these four approaches, Reserve Bank gives more attention to and M3 and among these two more emphasis is laid on M3.

According to new measurement of Reserve Bank Reserve Money [MB]:

In any economy the supply of money is affected by various factors.

Some of them are as follows:

Bank creates credit policies on the bases of their deposits. In banking system credit depends on quantity of money available in the fund. If, number of credits will increase it will lead to an increase in supply of money. On the contrary, quantity of credit will decrease if deposits decrease. Apart from this, expansion or contraction of credit also depends on the CRR of Reserve Bank.

On the other hand if the public desires to keep currency with them, maximum money in the form of currency then the credit creation capacity of bank will decrease and this will also lead to decrease in the supply of money.