We now assume that population does not remain fixed. Instead, the population and the size of labour force grow at a constant rate n.

The Steady State with Population Growth:

We assume that the number of workers is growing over time at the rate ‘n’ per period. So the change in capital stock per worker is

The term (δ + n)k may be treated as the break-even level of investment Which is necessary to keep per capita capital stock constant. Break-even investment has two components: replacement investment 8k which is a measure of depreciation of existing capital and new investment — the amount of investment necessary to provide new workers with capital.

With population growth we substitute sf(k) for i. The equation can then be expressed as 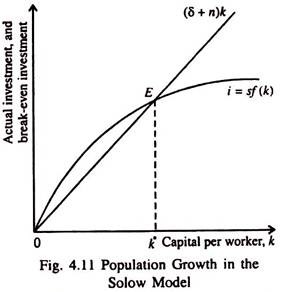 In the steady state the favourable effect of investment on the capital stock per worker just balances the negative effect of depreciation and population growth. This means that at the steady-state level of capital stock k*, Δk = 0, and i* = δk* + nk*.

As soon as an economy reaches the steady state, investment serves two purposes. A portion (δk*) replaces the depreciated capital and the balance nk* supplies the workers with the steady state amount of capital.

These Effects of Population Growth:

Population growth modifies the basic structure of the Solow growth in three ways:

Prima facie, population growth enables us to explain sustained economic growth. In the presence of population growth, capital per worker and output per worker remain constant in the steady state situation. Since the number of workers is increasing at the rate n, total capital and total output must also grow at the same rate if a steady state situation is to be maintained.

Population growth explains why some countries grow rich and others remain poor. Fig. 4.12 shows that an increase in the rate of population growth from n, to n2 reduces the steady-state level of capital per worker from k* to k*2. Since k* is lower, and because (y*) =f(k*), the level of output per worker y* is correspondingly lower.

This is an observed reality. So the Solow model can explain the observed income differences among different nations of the world over time. 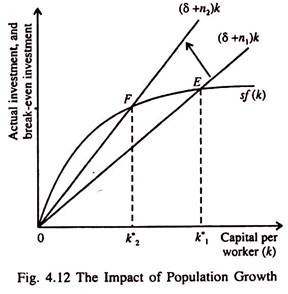 3. Altering the criterion for determining the Golden Rule level of capital:

This means that in the Golden Rule steady state, the net marginal (physical) product of capital equals the rate of growth of population.

However, the model fails to explain the persistent growth in living standards observed in most countries of the world — both developed and developing. In the basic Solow model, when the economy reaches its steady state, output per worker remains constant. To explain persistent growth, we have to incorporate the effects of technological progress in the model.

Since the effect of technological progress on economic growth can only be described and cannot be measured, it is known as a measure of our ignorance.

We may now incorporate this factor into the Solow model. It may be noted at the outset that while the growth of factor inputs over time leads to an increase in output directly, technological progress increases output indirectly, i.e., by raising the productivity of existing resources.

Technological progress alters the relationship between inputs (capital and labour) and the output of goods and services and thus leads to exogenous increases in society’s capacity to produce. It leads to intensive growth by shifting the production function upward.

where E is efficiency of the labour force, which is essentially a reflection of a society’s knowledge about the methods of production. With an improvement in technology, the efficiency of labour rises.

The Steady State with Technological Progress:

The effect of technological progress is the same as that of population growth because it is labour-augmenting in nature. Now we assume the number of effective workers to rise and describe the growth of the economy in terms of quantities (output levels) per effective worker.

In the presence of technological progress we have the following relation which shows how k grows over time: 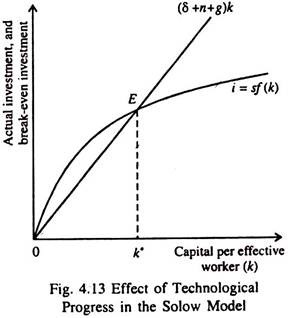 The Effect of Technological Progress:

The Criterion for the Golden Rule:

This is maximised if

This means that, at the Golden Rule level of capital, the net marginal physical product

of capital (net of depreciation), i.e., MPK – δ, must equal the rate of growth of total output which is the sum-total of growth of the labour force (n) and the rate of exogenous (labour- augmenting) technological progress (g).

Table 4.1 shows the behaviour of four key variables in the steady state with technological progress:

Implication of the Solow Model with Technological progress:

As soon as the economy reaches the steady state the rate of growth of output per worker depends only on the residual factor of growth. According to the Solow model, only continuous technological progress can explain the persistently rising living standard throughout the world.