The concept of quasi-rent was first of all introduced by Dr. Marshall.

According to him, “The term quasi rent will be used in the present volume as income derived from machines and other appliances of production made by man.”Basically”, the term “Quasi” has been derived from Latin word, meaning ‘as if. Therefore, it refers to “as if rent”.

Like Ricardo, Marshall also believed that land earns rent because its supply is scare. In the short-run, the supply of machines and other man-made goods is also inelastic. Suppose there is an increased demand for machines.

“The additional payment for those agents of production the supply of which though alterable in a long period, is fixed in short period is technically known as quasi-rent”. Silverman

Marshall has tried to explain the concept of Quasi Rent through the example of “Parable of meter of stone”. This shows how the inelastic supply of the factors in the short run earns rent for them.

1. It is assumed that some stones are gifted by nature only to a particular place.

2. It is also supposed that supply of these stones in the short period cannot be changed.

In order to know how the inelastic supply of the factors earns rent in the short-run, let us explain with the help of a diagram.

In fig. 9, X0S is the short run supply curve and DD is the demand curve of stones. In the short run, since, supply is fixed at OX0, the equilibrium per stone price will be OP0. But, in the long run, and supply becomes perfectly elastic as P0S0 shown in the fig. The demand curve D1D1 intersects the supply curve at point E1 and quasi rent is OX0 E1P1. But in the long run the supply becomes equal to demand. The new demand curve cuts the elastic supply at E2, so, no rent is earned. The price which prevails is equal to the cost of finding stones. Thus, no surplus is earned. 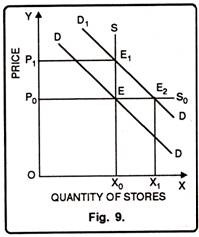 Quasi Rent as a Surplus over Variable Cost:

Marshall defined quasi-rent as the excess of total revenue over the total variable costs. In the short time, there are two types of factors of production viz; fixed factors and variable factors.

Fixed factors in the short period remain constant and the quantity of variable factors depends on the size of the production and there exists a shut down point in the short run.

Therefore, quasi rent can be expressed as:

The quasi rent can be illustrated through Figure 10 where output has been shown on OX-axis and price on OY-axis. MC and AVC are marginal cost and average variable cost curves respectively. 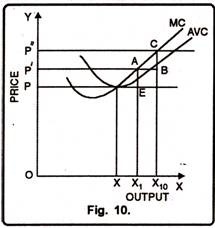 Rent Element in Other Factors:

(i) Quasi Rent and Profits:

We know all the entrepreneurs are not equally efficient. At one extreme, there are those who are just making profit i.e., low profits. Another extreme are those who enjoy high profits due to higher efficiency. They enjoy higher profits which are similar to the surplus enjoyed by superior land. There is thus the rent element in profits. Profits have been called rent of ability.

Among workers also, there is difference in efficiency i.e. some are efficient whereas others are less efficient. Wages, we know are based on personal efficiency. As intra-marginal workers enjoy more than the marginal workers, this surplus is termed as rent. It is like rent enjoyed by superior lands over marginal land.

The current interest rate compensates the marginal investor i.e. who are just induced to save. But there are other investors who are ready to save even at lower rates. Such intra-marginal investors enjoy a surplus i.e., rent element. But there is rent element in interest corresponding to the intensive form also. The marginal units of savings are just compensated by the rate of interest; the earlier units yield a surplus which is like rent.

In another sense all the factors of production enjoy rent. There is of course a minimum payment necessary to keep a factor in employment. Any income earned over the above this minimum amount is called rent. Thus rent is a “leading species of large genus.”