Here consumers are separated into different groups with different demand elasticities by charging different price at different points in time. Inter-temporal price discrimination can be seen in Fig. 9.12.

The strategy is to initially offer the product at a high price P1, selling to consumers represented by the demand curve D1. Later, after this first group of consumers has bought the product, the price is lowered to P2 to appeal to the mass market with demand curve D2. 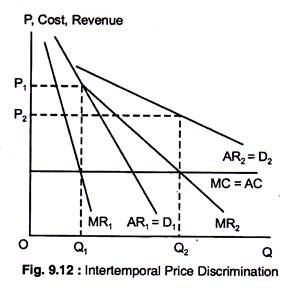 The Initial costs of capital good: Without other distortions, this is simply the private cost of the capital project.

However, local unemployment may reduce the social cost of construction workers below the market wage. Without the project, the workers make no other goods production externalities may also bad to a divergence of private of social values, where building capital goods fosters production externalities (e.g. skill development), this reduces the ‘social price’ of the capital good.

Valueing the stream of future costs of benefits:

Externalities cause a divergence between private and social cost and benefits.

An underground that reduces road congestion has social benefits beyond the revenue raised from fares. Society uses social not private values of costs of benefits.

To sum up, I decisions in state-owned firms should use social valuations of costs and benefits, and discount at the social discount rate not the private interest rate.

But for distortions elsewhere in the economy, public sector firms should set P = SMC. PMC should be adjusted for any production and consumption externalities that arise; ensuring that society equally values the mC + mB from the last unit of output.

Since SMC0 measures the MS opportunity cost in the SR of the resource used to produce this good, P = SMC0 = SMB = SMC. If demand is low, the industry should produce output Q1 operate at less than full capacity. Given the DC D2D2, SRMC pricing will lead to a price P2 of the industry will produce at full capacity.

Since output cannot be increased above Q0, ap > C is needed to keep the quantity demanded equal to the max quantity that can be supplied.

Thus in Fig. 2 we draw the LMC C as a horizontal line at the point P1 = C + CR. The LRMC of another unit is the marginal operating cost + the capital charge, per unit of output, suppose the dc, (SMB), is D2D2 of that the industry begins with a capital stock for which Q0 is the max output of SMC0 = the SMCC, P = SMC = P2.

Although socially efficient in the SR, but not efficient in the LR. Once capacity can be varied society wants to produce at E, where MSB = LMC. By increasing the capital stock until its max. output is Q2, society gains the area ABE, the excess of MB over MC when output is increasing from Q0 to Q2.

Pricing of I decisions are this interconnected. In the SR output should be priced at SMC, the social opp-cost of the resources employed.

However, in the LR society should I if the PV of future benefits > the cost of adding to the capital stock. Instead of this stock evaluation of I decisions we can use the equivalent flow evaluation. The capital stock should be increased if the MSB > LMC inclusive of the capital charge. Thus, although prices are set according to SMC, in the LR I will change capacity of shift the SMCC.

Hence, although prices are set according to SMC, in the LR I will adjust the capital stock of full capacity output until P = LMC. In the LR the efficient allocation is at point E in Fig. 2, where MB, SMC of LMC councide.

Finally, we simply replace social by private assessments of benefit of cost, of use the relevant private discount rate. However, profit-max. behaviour still recognises the interdependence of pricing and I decisions.