Here we detail about the merits and demerits of fixed exchange rate system.

In defence of fixed exchange rate system, it has been pointed out that it ensures stability in exchange rate.

Exchange rate stability, it is said, is necessary for orderly devel­opment of the international economy and rapid growth of world trade. If the exchange rate is un­stable or variable, the exporters will not be certain about the price they would receive for the goods to be exported by them; the importers will not be certain about the price and the payments they have to make for their imports.

These uncertainties involve risks for exporters and importers. This greatly harms the growth of world trade. Thus, the chief merit of fixed exchange rate system is that it eliminates the possibilities of such uncertainties and associated risks and thereby promotes foreign trade.

Foreign private firms would not be interested in making investment in those countries whose currency is not stable. Since foreign investment is an important source of economic growth, the fixed exchange rate system would promote rapid economic growth of the developing countries.

Further, flexible and unstable exchange rates may at times of diffi­cult economic situation may encourage flight of capital, as happened in case of Mexico i few years ago causing a serious balance of payments problem. On the other hand, a stable exchange rate ensures that such capital outflow would not occur.

They try to manipulate the exchange rate through their actions of buying and selling foreign exchange and try to obtain speculative gain in this way. Ragnar Nurkse in his study of International Currency Experi­ence which he conducted for the period of twenties found that because of speculative activities, flexible exchange rate had a destabilizing influence. It caused greater fluctuations than would have been the case otherwise. By eliminating speculation fixed exchange rate system ensures stability in the exchange rate.

5. Serves as an anchor against inflation:

Another important advantage of fixed exchange rate system is that it prevents the Government of the countries from adopting inflationary policies. Gen­erally, Governments have often been tempted to pursue undue expansionary fiscal and monetary policies to lower unemployment and create boom conditions. However, inflation has several bad effects for the economies.

It increases inequalities of income and wealth and hurts the poor most. Further, inflation hampers economic growth in the long run. Fixed exchange rate system forces the Governments to achieve price stability by taking effective anti-inflationary measures. This is because in the case of fixed exchange rate, inflation will cause balance of payments deficits and result in loss of international reserves.

Therefore, this forces the Government to adopt measures to check inflationary pressures in the economy. To quote B. Soderston, “Fixed exchange rates can serve as an anchor. Inflation will cause balance of payments deficits and losses in reserves. Hence the authorities will have to take counter measures to stop inflation. Fixed exchange rates should therefore impose a discipline on governments and stop them from pursuing inflationary policies which are out of time with the rest of the world.”

6. Promotes economic integration of the world:

It has also been argued in favour of fixed exchange rate system that it is necessary for achieving economic integration of the world commu­nity. This is similar to a single common currency in a country which promotes economic integration of a nation in the sense that it facilitates communication, trade and free movement of finance be­tween different regions of a country.

It ensures free competition among all producers and consumers of various countries. Similarly, a common currency would promote economic integration of the world. Fixed exchange rate between the currencies of the various countries approximately serves the purpose of a single currency between different countries.

Thus, fixed exchange rates among different currencies is a necessary condition for the purpose of forming economic union between various countries, that is, forming a regional grouping. To enjoy the advantages of economic unity in recent years, there is a proposal for issuing a single currency for European countries to strengthen the economic integration of European countries.

Fixed exchange rate had however a great flaw in that the countries with a large and persistent balance of payments deficits were losing gold and other foreign assets. This could not go on forever as evidently stock of gold and foreign currencies would have run out. That is why the USA aban­doned Bretton Woods System which represented fixed exchange rate system. The other countries facing problem of balance of payment deficit found their international reserves dwindling which forced them to devalue their currency. The devaluation has an inflationary potential. 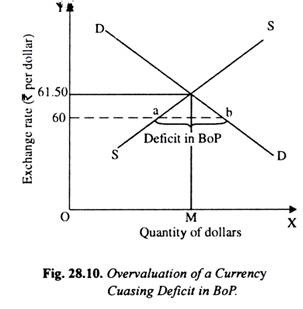 On the other hand, under the fixed exchange rates, the countries with a balance of payments surplus will be providing its national currency and in return it will receive foreign currencies and assets such as US dollar, pounds, gold. The increase in foreign assets would lead to the expansion in money supply which is likely to create inflationary pressures in the economy.

Another problem with the fixed exchange rate system is that at what level exchange rate should be fixed. If the exchange rate of a foreign currency with a national currency is fixed or pegged at the equilibrium level, that is, at the rate at which its quantity demanded equals quantity supplied, no problem arises.

However, for the Government it is difficult to find such an equilibrium exchange rate of a foreign currency in terms of the national currency. Further, as underlying conditions change as they do so frequently, the equilibrium exchange rate will also change giving rise to the problems. If the exchange rate of a national currency in terms of the foreign currency, say US dollar, is fixed at a higher level, there will be deficit in the balance of payments (BoP). 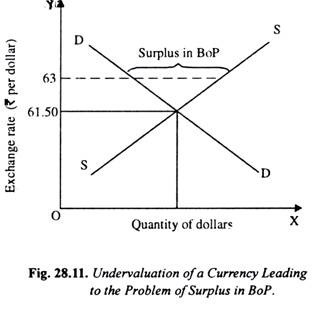 As a result, India’s stock of foreign exchange (i.e., dollars) and other foreign assets will decline. Sooner or later India will be forced to take policy measures to correct this deficit in BoP. India will have to adopt contractionary fiscal and monetary policies to reduce aggregate expenditure in the economy so that imports decrease or it will impose various restrictions on imports to reduce them.

With the reduction in imports through these policy measures demand curve of dollars in Fig. 28.10 will shift to the left and may interested the supply curve SS at point a to be in equilibrium at the exchange rate of Rs.60 to a dollar. To reduce persistent deficit in BoP, it may even resort to devaluation if it has a fixed exchange rate system.

Now, consider Fig. 28.11 if the Government fixes the exchange rate of rupee at a lower rate, say RS. 63 per US dollar, the quantity supplied of dollars by other countries would exceed the quantity demanded by the Indians. As Rs.63 per US a dollar, the Indian rupee is under-valued (or, which is the same thing, dollar is overvalued in terms of rupees). Historical experience shows that countries with surplus in BoP have been reluctant to revalue their currency (that is, to raise the international value of their currency).

Thus, a surplus in balance of payments also gives rise to a problem. As a result of this surplus due to under-valuation of the rupee, India will accumulate dollars (i.e., foreign exchange) for which it would pay rupees, the national currency. The new rupee notes would be printed to pay for dollars. Thus, surplus in BoP leads to the expansion in money supply generating inflationary pressures in the Indian economy.

To check inflation, the Indian Government might there­fore take steps to eliminate the surplus in BoP by encouraging imports or restricting exports. Further, it may try to take steps to neutralize the impact of surplus in BoP on expansion in money supply. For this purpose, it might encourage capital outflows (i.e., investment abroad) by private firms or provide concessional financial assistance to other countries. In view of the above drawbacks and problems the fixed exchange rate system has been given up despite its various advantages explained above.