Deficit financing in advanced countries is used to mean an excess of expenditure over revenue—the gap being covered by borrowing from the public by the sale of bonds and by creating new money. In India, and in other developing countries, the term deficit financing is interpreted in a restricted sense.

The National Planning Commission of India has defined deficit financing in the following way. The term ‘deficit financing’ is used to denote the direct addition to gross national expenditure through budget deficits, whether the deficits are on revenue or on capital account.

The essence of such policy lies in government spending in excess of the revenue it receives. The government may cover this deficit either by running down its accumulated balances or by borrowing from the banking system (mainly from the central bank of the country).

The ‘Why’ of Deficit Financing:

Developing countries aim at achieving higher economic growth. A higher economic growth requires finances. But private sector is shy of making huge expenditure. Therefore, the responsibility of drawing financial resources to finance economic development rests on the government. Taxes are one of such instruments of raising resources.

Being poor, these countries fail to mobilize large resources through taxes. Thus, taxation has a narrow coverage due to mass poverty. A very little is saved by people because of poverty. In order to collect financial resources, government relies on profits of public sector enterprises. But these enterprises yield almost negative profit. Further, there is a limit to public borrowing.

In view of this, the easy as well as the short-cut method of marshalling resources is the deficit financing. Since the launching of the Five Year Plans in India, the government has been utilizing seriously this method of financing to obtain additional resources for plans. It occupies an important position in any programme of our planned economic development.

i. To finance defence expenditures during war

ii. To lift the economy out of depression so that incomes, employment, invest­ment, etc., all rise

iv. To raise capital formation by mobilizing forced savings made through deficit financing

If the usual sources of finance are, thus, inadequate for meeting public expenditure, a government may resort to deficit financing.

The ‘How’ of Deficit Financing:

A budget deficit arises when the estimated expenditure exceeds estimated revenue. Such deficit may be met by raising the rates of taxation or by the charging of higher prices for goods and public utility services. The deficit may also be met out of the accumulated cash balances of the government or by borrowing from the banking system.

Deficit financing in India is said to occur when the Union Government’s current budget deficit is covered by the withdrawal of cash balances of the government and by borrowing money from the Reserve Bank of India. When the government draws its cash balances, these become active and come into circulation.

Again, when the government borrows from the RBI, the latter gives loan by printing additional currency. Thus, in both cases, ‘new money’ comes into circulation. It is to be remembered here that government borrowing from the public by selling bonds is not to be considered as deficit financing.

Deficit financing has several economic effects which are interrelated in many ways:

i. Deficit financing and inflation

i. Deficit Financing and Inflation:

This method of financing during war­time is totally unproductive since it neither adds to society’s stock of wealth nor enable a society to enlarge its production capacity. The end result is hyperinflation. On the contrary, resources mobilized through deficit financing get diverted from civil to military production, thereby leading to a shortage of consumer goods. Anyway, additional money thus created fuels the inflationary fire.

To quote an expert view: “Deficit financing, undertaken for the purpose of building up useful capital during a short period of time, is likely to improve productivity and ultimately increase the elasticity of supply curves.” And the increase in productivity can act as an antidote against price inflation. In other words, inflation arising out of inflation is temporary in nature.

The most important thing about deficit financing is that it generates economic surplus during the process of development. That is to say, the multiplier effects of deficit financing will be larger if total output exceeds the volume of money supply. As a result, inflationary effect will be neutralized. Again, in LDCs, developmental expenditure is often pruned due to the shortage of financial resources.

However, the end result of deficit financing is inflation and economic instability. Though painless, it is very much inflation-prone compared to other sources of financing.

Some amount of inflation is inevitable under the following circumstances:

Again, a persistent deficit financing policy would soon directly lead to inflationary price rise. It is true that the gestation period of capital goods is long. Thus, the effect of increased output can only be felt after a long time gap. But deficit financing immediately releases monetary resources leading to excessive monetary aggregate demand which creates demand-pull inflation.

Thus, deficit financing has a great potentiality of fanning out demand- pull and cost-push inflationary forces.

(c) We have already said that some amount of inflation is inevitable in LDCs. In these countries, not all aggregate demand can be met because of the low production. It is due to lack of complementary resources and various types of bottlenecks that actual production falls short of potential output.

The low elasticity in the supply of essential goods and the rising aggregate expenditures result in high propensities to consume and low propensities to save. Thus, the real problem of LDCs is not the deficiency of effective demand but low rate of capital formation, market imper­fections, etc.

But its price rises due to the inelasticity in supply. Consequently, prices of non-agricultural goods rise. Thus, deficit financing is inflationary in LDCs—whether the economies remain at the state of full employment or not.

The impact of deficit financing on the price level in both developed and underdeveloped countries can be demonstrated in terms of the Fig. 12.3. 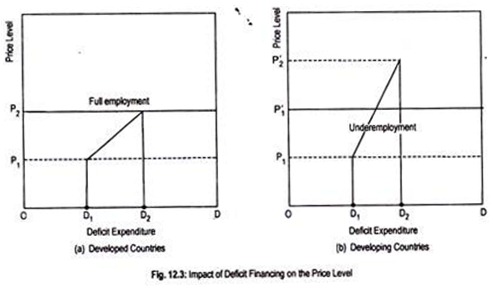 One estimate suggests that a deficit budget covered by deficit financing of one per cent leads to a rise in the price level by approximately 1.75 per cent.

During inflation, producers are largely benefited compared to the poor fixed-income earners. Saving propensities of the former are considerably higher. As a result, aggregate savings of the community becomes larger which can be used for capital formation to accelerate the level of economic development.

Further, deficit-led inflation tends to reduce consumption propensities of the public. Such is called ‘forced savings’ which can be utilized for the production of capital goods. Consequently, a rapid economic development will take place in these countries.

However, the multiplier effect of deficit financing in poor countries must be weaker even if these countries exhibit underemployment of resources.

In other words, national income does not rise enough due to deficit financing since these countries suffer from shortage of capital equipment and other complementary resources, lack of technical knowledge and entrepreneurship, lack of communications, market imperfections, etc.

However, this conclusion is too hard to digest. It helps economic development, although not in a great way. It is true that deficit financing is self-defeating in nature as it tends to generate inflationary forces in the economy. But it must not be forgotten that it is self-destructive in nature since it has the potentiality of raising output level to counter the inflationary threat.

To the underdeveloped countries, there is no escape route to bypass the technique of deficit financing. Everyone admits that it is inflationary in character. But at the same time it helps economic development. Hence the dilemma to the policy makers. However, everything depends on the magnitude of deficit financing and its phasing over the time horizon of development plan.

It has to be kept within the ‘safe’ limit so that inflationary forces do not appear in the economy. But nobody knows the ‘safe’ limit. In view of all these, it is said that deficit financing is an ‘evil’ but a ‘necessary evil’. Much of the success of deficit financing will be available to the economy if anti-inflationary policies are employed in a just and right manner.

It is said that deficit financing tends to widen income inequality. This is because of the fact that it creates excess purchasing power. But due to inelasticity in the supply of essential goods, excess purchasing power of the general public acts as an incentive to price rise. During inflation, it is said that rich becomes richer and the poor becomes poorer. Thus, social injustice becomes prominent.

However, all types of deficit expenditure, not necessarily tend to disturb existing social justice.

Advantages and Disadvantages of Deficit Financing:

Its popularity is due to the following reasons:

Firstly, massive expansion in governmental activities has forced govern­ments to mobilize resources from different sources. As a source of finance, tax-revenue is highly inelastic in the poor countries. Above all, governments in these countries are rather hesitant to impose newer taxes for the fear of losing popularity. Similarly, public borrowing is also insufficient to meet the expenses of the state.

Secondly, in India, deficit financing is associated with the creation of additional money by borrowing from the Reserve Bank of India. Interest payments to the RBI against this borrowing come back to the Government of India in the form of profit. Thus, this borrowing or printing of new currency is virtually a cost-free method. On the other hand, borrowing involves payment of interest cost to the lenders.

Fourthly, deficit financing has certain multiplier effects on the economy. This method encourages the government to utilize unemployed and underemployed resources. This results in more incomes and employ­ment in the economy.

Finally, during inflation, private investors go on investing more and more with the hope of earning additional profits. Seeing more profits, producers would be encouraged to reinvest their savings and accumulated profits. Such investment leads to an increase in income—thereby setting the process of economic development rolling.

The evil effects of deficit financing are:

Firstly, it is a self-defeating method of financing as it always leads to inflationary rise in prices. Unless inflation is controlled, the benefits of deficit-induced inflation would not fructify. And, underdeveloped countries— being inflation-sensitive countries—get exposed to the dangers of inflation.

Secondly, deficit financing-led inflation helps producing classes and businessmen to flourish. But fixed-income earners suffer during inflation. This widens the distance between the two classes. In other words, income inequality increases.

Thirdly, another important drawback of deficit financing is that it distorts investment pattern. Higher profit motive induces investors to invest their resources in quick profit-yielding industries. Of course, investment in such industries is not desirable in the interest of a country’s economic development.

Fourthly, deficit financing may not yield good result in the creation of employment opportunities. Creation of additional employ­ment is usually hampered in backward countries due to lack of raw materials and machineries even if adequate finance is available.

Fifthly, as purchasing power of money declines consequent upon inflationary price rise, a country experiences flight of capital abroad for safe return—thereby leading to a scarcity of capital.

Finally, this inflationary method of financing leads to a larger volume of deficit in a country’s balance of payments. Following inflationary rise in prices, export declines while import bill rises, and resources get transferred from export industries to import- competing industries.

In spite of this, deficit financing is inevitable in LDCs. Much success of it depends on how anti-inflationary measures are employed to combat inflation. Most of the disadvantages of deficit financing can be minimized if inflation is kept within limit.