The following points highlight the top four functions of money. The functions are: 1. A Medium of Exchange 2. A Measure of Value or Unit of Account or Means of Valuation 3. Store of Value 4. Standard of Deferred Payment.

Function # 1. A Medium of Exchange:

Suppose, a shopkeeper likes to pay ten kilograms of detergent to his workers as wages. Now this worker will have to search people who are in need of this product. Such job is not only time-consuming but also impossible. Thus, under barter system, transaction cost—the time spent for exchange of goods and services—is very high since people will have to satisfy “double coincidence of wants”.

This means that all people will have to find someone who has a good that they want and who want to get the service or good they have to offer. If money is used to pay wages then no one will grudge. In other words, if money is used as a medium of exchange then this difficulty is automatically removed.

To act as an ideal medium of exchange, money should have the following attributes:

Function # 2. A Measure of Value or Unit of Account or Means of Valuation:

Money acts as a unit of account or money is the measure of exchange value. This means that money is a sort of common denominator, through which the exchange value of all goods and services can be expressed without any difficulty. Innumerable exchange rates under the barter system earlier caused enormous trouble in the transactions of all kinds.

If we go back to the days of the barter system we will then find ½ n (n – 1) separate exchange rates:

Further, since the value of all commodities is expressed in terms of money, one can compare the values of commodities. Suppose, the price of commodity X is Rs. 5 while that of Y is Rs. 10. Thus, Y is twice as expensive as X. This means that money serves as a measure of value. Money also enables dissimilar things such as a person’s car or real estate to be added up. National income is also expressed in terms of money. 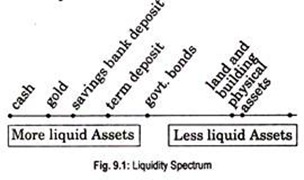 Because of perfect liquidity, money acts a store of value. By liquidity, we mean convertibility of assets into cash. Money, like bonds, government securities etc. is an asset because it is a claim. Money being the most liquid asset among all assets (stocks, lands, jewellery, etc.) people prefer to keep their assets in the form of money. Liquid assets facilitate transactions of all kinds of goods and services.

Lending and borrowing virtually come to halt in a moneyless economy. With the introduction of money, borrowing and lending have become easier. With the expansion of trade and commerce based on credit, money has become a standard of deferred payments. Deferred payments are those which are postponed for the future. Money enables current transactions to be discharged in future.

These four functions of money can be expressed with the help of the following couplet:

Money is a matter of functions four.

A medium, a measure, a standard and a store.