Let us make an in-depth study of the objectives, advantages and disadvantages of monetary policy.

The term ‘credit control’ refers to the adjustment made by the central bank in bank advances to the needs of trade and commerce for price and exchange stability.

It has two major aspects:

(a) credit expansion i.e., increase of the total volume of bank credit and

(b) credit contraction, i.e., decrease of the total volume of bank credit.

The credit control has some major objec­tives:

(a) Stability of internal prices

(b) Stability of the foreign exchange rates

So long we have described the central bank’s controls from the standpoint of combating inflation by contraction of the money supply. The controls can, however, be used equally well to expand the supply of money.

Thus, if the government wishes to stimulate trade it can instruct the bank to reduce the cost of borrowing by increasing the availability of loans through releasing special deposits, and buying securities in the open market, by issuing directives encouraging adoption of a generous lending policy and by reducing the level of interest rates. 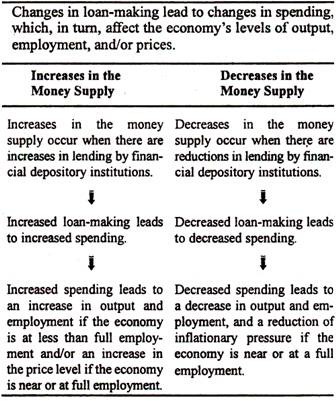 There are several advantages and disadvan­tages in using monetary policy as a tool for correcting the problems of inflation and un­employment. A primary advantage is the speed with which changes can be implemented. Unlike fiscal policy — which could take months to implement — the first steps toward changing the money supply can be taken the day the decision to do so is made.

A second advantage of using monetary policy is its flexibility with regard to the size of the change to be implemented. Reserves can be increased or decreased in small or large incre­ments.

One of the major disadvantages of mone­tary policy is the loan-making link through which it is carried out. That is, the R.B.I. can increase reserves to stimulate economic activity as much as it wants, but the reserves them­selves do not alter the money supply.

For the money supply to increase someone must be willing to borrow and a bank must be willing to lend. Because the R.B.I. cannot force the loan-making process, it has only indirect control over increasing the money supply. This loan-making link may reduce the effec­tiveness of monetary policy in fighting unem­ployment during a deep and serious recession. If economic conditions are severe, no expansion of reserves or lowering of the interest rate may be enough to induce borrowers to take loans.

A second problem with monetary policy occurs during inflation. As the Reserve Bank tightens the money supply and forces the interest rate higher, it raises the price for borrowed money. Businesses that borrow at this high rate may, in turn, raise prices on their products to compensate. Thus, fighting inflation with monetary policy could worsen it.