Let us make in-depth study of the growth and performance of public sector in India.

Since 1956, there has been an impressive growth of the public sector enterprises. Both the Central and State Governments have set up industrial enterprises for production of both goods and services.

The amount of investment in public sector enterprises has been rapidly increasing. The growth of public enterprises started by the Central Government can be observed from Table 37.1. 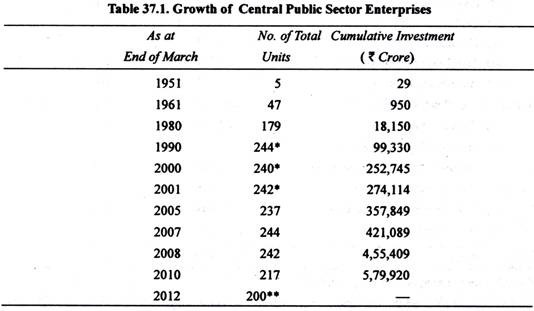 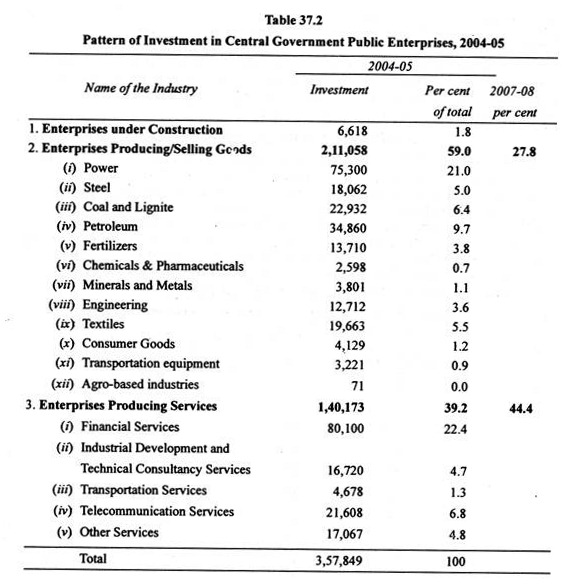 The remaining investment (10.55%) of CPSEs was under construction. Thus, a major part of public investment by Central Government has been made in infrastructure such as power, coal, petroleum and basic heavy industries such as steel, fertilizers, engineering. Public investment in financial services (which include commercial banks, nationalized insurance companies) Rs. 80,100 (22.4 per cent of total public sector investment) was made till the year 2004-05. It may however be noted that a great deal of investment in CPSEs is being made through internal resources rather than through investment from outside.

In 2004-05, Rs. 19,663 crores (5.5%) remained invested in textiles. This was done for the purpose of protecting the interests of workers who would have become unemployed if these sick private sector enterprises would have closed down.

In Table 37.3 we have provided the data showing various measures of profitability of Central Public Sector Undertakings. It will be seen from this table that in the year 1991-92 when the process of privatization or disinvestment was started, profitability of Central Public Enterprises was relatively low. Profitability measured in terms of per cent of gross profits to capital employed was 11.6 in 1991-92 and 11.4 in 1992-93. Profitability measured in terms of net profit after tax to capital employed was 2.3 per cent in both 1991-92 and 1992-93.

It may be further noted that in order to improve the efficiency and profitability of public undertakings, they have been given autonomy by the Government in their working and decision-making through signing of Memoranda of Understanding (MOUs). In 2000-2001, 107 PSUs signed Memoranda of Understandings. It is expected that with the autonomous functioning the efficiency and profitability of these enterprises will further improve.

Public sector enterprises should not be judged on the basis of profitability alone. There are other criteria by which they can be judged.

Technical efficiency implies ratio of output produced by an enterprise to inputs used, which is also called total factor productivity. Allocative efficiency refers to the correction of market failures by the production of certain essential products by public enterprises which private enterprises will not produce on the basis of free working of price mechanism. 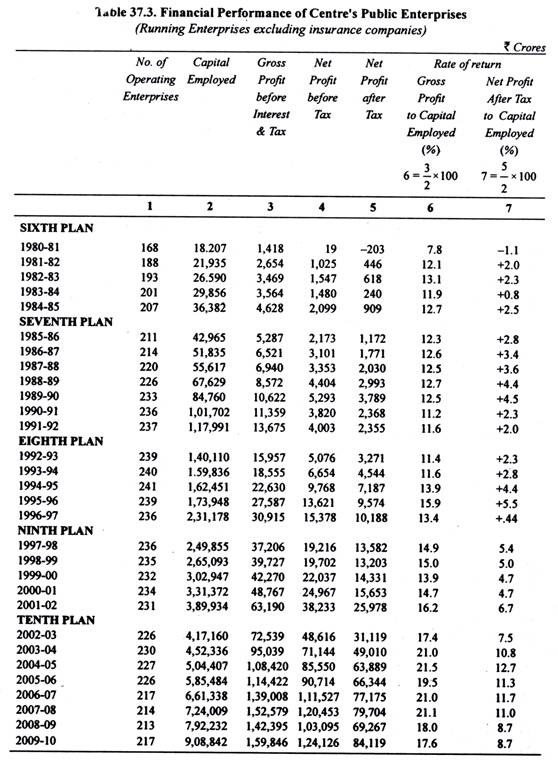 Besides, the gross profit (before interest and tax) to capital employed of these enterprises in 2009-10 was 17.6 per cent as compared to 18 per cent in 2008-09. The year 2009-10 also witnessed severe financial under-recoveries by public sector oil marketing companies as they had to keep the prices low in the domestic market on sales of petroleum products.

It will be seen from Table 37.4 that cumulative investment (paid-up capital plus long term loans) in all the CPSEs stood at Rs. 5,79,920 crore as on 31 March 2010, an increase of 12.93 per cent over 2008-09. The capital employed in all the CPSEs went up by 14.73 per cent during the same period. A great deal of investment in CPSEs is accounted for by internal resources rather than through investment from outside.

The net profit of the profit-making CPSEs (158) stood at Rs. 1,08,434.68 crore in 2009-10. The net loss of the loss-making enterprises (59), on the other hand, stood at Rs. 15,842 crore during the same period. The year also witnessed severe financial under-recoveries by public sector oil marketing companies (OMCs) as they had to keep prices on sale of petroleum products low in the domestic market. The foreign exchange earnings of the CPSEs amounted to Rs. 77,745 crore during 2009-10 and were clearly overtaken by the foreign exchange outgo of Rs. 4,20,415 crore (Table 37.4). 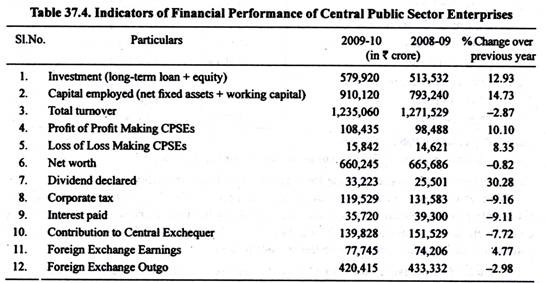 It will also be seen from Table 37.4 that net worth of Central Public Sector Enterprises (CPSEs) decreased by 0.82 per cent in 2009-10 over 2008-09, dividend declared increased by 30.28 per cent, corporation tax paid declined by 9.16 per cent and contribution to central exchequer decreased by 7.7 per cent.

The Recent Performance of CPSEs in Terms of Turnover and Net Profit: