Let us make in-depth study of the Heckscher-Ohlin’s theory of international trade.

The new theory propounded by Heckscher and Ohlin went deeper into the underlying forces which cause differences in compara­tive costs.

They explained that it is differences in factor endowments of different countries and different factor-proportions needed for producing different commodities that account for difference in comparative costs. This new theory is therefore-called Heckscher-Ohlin theory of international trade.

It is worthwhile to note that, contrary to the viewpoint of classical economists, Ohlin asserts that there does not exist any basic difference between the domestic (inter-regional) trade and inter­national trade. Indeed, according to him, international trade is only a special case of inter-regional trade.

Thus, Ohlin asserts that it is not the cost of transport which distinguishes international trade from domestic trade, for transport cost is present in the domestic inter-regional trade. Trade because currencies of different countries are related to each other through foreign exchange rates which determine the value or purchasing power of different currencies.

Ohlin, therefore, regards different nations as mere regions separated from each other by national frontiers, different languages and customs, etc. But these differences are not such that prevent the occurrence of trade between na­tions. He, therefore, asserts that general theory of value which can be applied to explain inter­regional trade can also be applied equally well to explain international trade.

Thus, Heckscher-Ohlin theory does not contradict and supplant the comparative cost theory but supple­ments it by offering sufficiently satisfactory explanation of what causes differences in comparative costs.

According to Ohlin, the underlying forces behind differences in comparative costs are two­fold:

1. The different regions or countries have different factor endowments.

2. The different goods require different factor-proportions for their production.

Thus a country A which has a relative abundance of capital and relative scarcity of labour will have a comparative advantage in specialising in the production of capital-intensive commodities and in return will import labour-intensive goods. This is because (PK/PL)A < (PK/PL)B.

On the other hand, a labour-abundant country B with a scarcity of capital will have a compara­tive advantage in specialising in the production of labour-intensive commodities and export some quantities of them and in exchange for import capital-intensive commodities. This is because in this country (PL/PK)B < (PL/PK)A.

If factor endowments in the two countries are the same and factor-productions used in the production of different commodities do not differ, there will be no differences in relative factor prices [i.e. (PK/PL)A < (PK/PL)B] which will mean differences in comparative costs of producing commodities in the two countries will be non-existent. In this situation the countries will not gain from entering into trade with each other.

Let us graphically explain the Heckscher-Ohlin theory of international trade. Take two coun­tries U.S.A. and India. Assume that there is a relative abundance of capital and scarcity of labour in U.S.A. and, on the contrary, there is a relative abundance of labour and scarcity of capital in India. (This is the real situation as well).

Given these factor endowments we have drawn the production possibility curves (also known as transformation curves) between two commodities, cloth and ma­chines of the two countries, U.S.A. and India in Fig. 23.5 and 23.6 respectively. 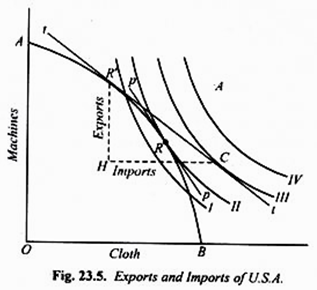 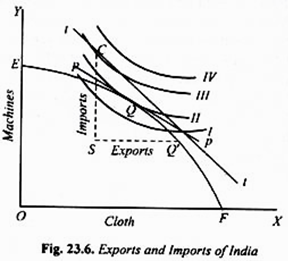 Since the two countries have different factor endowments their production possibility curves will differ. As will be seen from Fig. 23.5, the production possibility curve AB of U.S.A. shows that given its factor endowments, U.S.A. can produce relatively more of capital-intensive commodity machines and relatively less of labour-intensive commodity cloth.

In the absence of foreign trade, equilibrium in each country would be determined by the following rule:

In the geometric terms, the above rule implies that in the absence of foreign trade the produc­tion and consumption in the two countries would take place at the tangency point of the given production possibility curve with the highest possible community indifference curve.

It will be observed from Figure 23.5 that in the absence of trade, U.S.A. will be in equilibrium position with production and consumption at point R where its production possibility curve AB is tangent to its community indifference curve II.

The tangent pp to the production possibility curve AB and the community indifference curve II at point R indicates the ratio of price of the two com­modities (i.e. the domestic rate of exchange) before trade in U.S.A.

As regards India, as shown in Figure 23.6 before trade, she will be in equilibrium with produc­tion and consumption at point Q at which its production possibility curve is tangent to its commu­nity indifference curve II. Tangent pp at point Q to its production possibility curve EF and the community indifference curve II shows the domestic rate of exchange of two commodities before foreign trade.

It will be seen from Figure 23.5 that in U.S.A. the consumption point C after trade lies at a higher indifference curve than before trade indicating the gain from trade it obtains. The consumption point C of U.S.A. as compared to its production point R’ after trade reveals that U.S.A. produces HR’ more of machines and HC less of cloth than it consumes domestically. Thus U.S.A. will export HR’ of machines and import HC of cloth.

As a result of trade India has also gained as she has reached a higher community indifference curve. Thus after trade with the production point Q’ and consump­tion point C, India will produce SQ’ more of cloth and SC less of machines than it consumes at home. Thus India will export SQ’ of cloth and import SC of machines.

It follows from above that due to differences in factor endowments in U.S.A. and India also and due to different factor proportions required for the production of different commodities the basis for trade between the two countries exists and both would gain from trade by specialising in the production of commodities which require factors in respect of which they are well endowed and will import those commodities which need factors which are relatively in scarce supply.

First, it rescued the theory of international trade from the grip of labour theory of value and based it on the general equilibrium theory of value according to which both demand and supply conditions determine the prices of goods and factors.

Second, Heckscher-Ohlin theory removes the difference between international trade and inter-regional trade, for the factors determining the two are the same. Third, a significant improvement is the explanation offered for difference in comparative costs of commodities be­tween trading countries.

These reasons advanced by Heckscher and Ohlin for differences in comparative costs of commodities in different countries are considered to be broadly true.

Fourth, as has been pointed out by Prof. Lancaster, Heckscher-Ohlin model provides a satis­factory picture of the future of foreign trade. According to the Ricardian theory, international trade exists because of differences in skill and efficiency of labour alone.

This implies that as there is transmission of knowledge between the countries so that they master the techniques and skills of each other, then differences in comparative costs would cease to exist and as a result international trade would come to an end. But this is not likely to occur despite the fact that transmission of knowledge and techniques has greatly increased these days.

Heckscher and Ohlin explain that in­ternational trade is due to the differences in factor-endowments (i.e. differences in supplies of all factors and not only of labour efficiency) and different factor-proportions required for different commodities. Since the factors such as land and other natural resources lack mobility, international trade would not cease to exist even if there is perfect transmission of knowledge between the coun­tries.

Despite the above merits of Heckscher-Ohlin theory, it has some shortcomings which are briefly discussed below:

In the Heckscher-Ohlin theory it has been assumed that relative factor prices reflect the relative supplies of factors. That is, a factor which is found in abundance in a country will have a lower price and vice versa. This means that in the determination of factor-prices supply outweighs demand.

But if demand for factors prevails over supply, then factor prices so determined would not conform to the supplies of factors. Thus, if in a country there is abundance of capital and scarcity of labour in physical terms but there is relatively much greater demand for capital, then the price of capital would be relatively higher to that of labour.

2. Difference in Preferences or Demands for Goods:

Let us take an extreme example. Suppose there are two countries A and B with same factor-endowments. According to Heckscher-Ohlin theo­rem, with same factor endowments cost-ratio of producing the two commodities and hence the commodity price ratio would be the same. 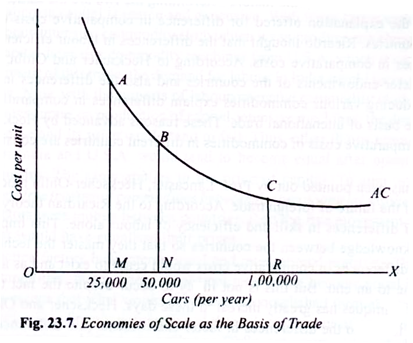 Algebraic Analysis of IS – LM Model (With Numerical Problems)
Inflation in India: Causes, Effects and Curve