The following points highlight the two major types of elasticity. The two types are: A. Income Elasticity B. Cross-Elasticity of Demand.

A. Income Elasticity of Demand:

Income elasticity of demand is the degree to which the demand for a commodity responds to a change in income.

The coefficient of income elasticity may be measured by using the following formula: 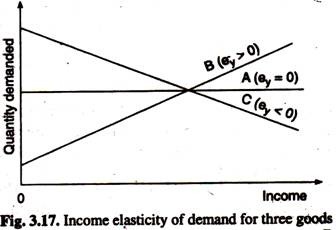 B. Cross-Elasticity of Demand:

Cross-elasticity of demand is the degree to which the demand for one commodity res­ponds to a change in the price of another commodity.

The formula for measuring the coefficient of cross elasticity of demand is: 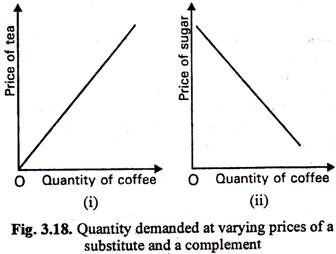 In fact, the value of Ee may vary from minus infinity to plus infinity. Goods which are close substitutes (like Limca and Campa Cola) or complements (kerosene stoves and kerosene) will tend to show a fairly high degree of Ec. Conversely, when there is little, if any, relation between goods then the Ec will be near to zero.

Top 10 Factors which Affect Price Elasticity in Economics
Elasticity of Demand: Meaning and Types (With Calculations)