Article Shared by Sucheta A

Compilation of Notes on the Central Problems of an Economy with its solution for class 10, 11 and 12 students.

Rich or poor, developed or undeveloped, every economy must face three central problems.

(A) What to produce?

(C) For whom to produce?

Following is a brief description of these problems:

(A) What to Produce?

This problem has two dimensions:

(i) What goods are to be produced, and

(ii) In what quantity goods are to be produced.

(i) What Goods are to be Produced?

Broadly, goods are classified as –

(a) Capital goods, and

If the limited resources are largely used for the production of consumer goods, the present generation will enjoy good quality of life. But, lack of capital goods would mean lack of future growth. The future generations would suffer.

(ii) In What Quantity Goods are to be Produced:

‘How to produce’ refers to the technique of production.

Broadly, there are two techniques of production –

(i) Labour-intensive technique, and

(C) For Whom to Produce?

Owing to limited resources, an economy cannot produce goods for all sections of the society to the extent desired.

Broadly, every economy has two sections of the society –

Social justice is promoted if more goods are produced for the poor. It would reduce inequality or promote equality. But, there is a hidden cost of doing it.

By producing goods for the poor, the profits of the producers would remain low. Low profits would mean low investment which Implying low GDP growth. The economy would remain backward for a long time to come. Thus, there is a problem of choice: social equality or GDP growth.

There are two add-on (additional) problems specific to underdeveloped economies like India.

(i) Problem of underutilization of resources, and

(ii) Problem of growth of resources.

(i) Problem of Underutilization of Resources:

In most underdeveloped economies (like India), the resources are not fully utilised. These are underutilised or inefficiently utilised. Accordingly, actual output remains less than the potential output (maximum possible output attainable with the given resources). Underutilisation of resources occurs due to various reasons. ‘Lack of work culture’ in underdeveloped countries is an important reason for underutilisation of resources. There are frequent strikes and lock-outs which lead to loss of output.

(ii) Problem of Growth of Resources:

Different economies solve the central problems differently, as under:

Market economy is a free economy. It means that producers are free to decide ‘what, how and for whom to produce’. On what basis do they take their decisions? It is on the basis of supply and demand forces in the market.

The decisions are taken as under:

a. What to Produce?

The producers will produce those goods which offer them high profits.

b. How to Produce?

The producers will always use that technology which maximizes efficiency and minimizes cost.

c. For Whom to Produce?

In a free economy, the producers will produce goods for those people who can afford to pay high price. Poorer sections of the society are often ignored. It causes the problem of Economic Divide (the gulf between the rich and the poor).

Briefly, in a market economy, the decisions relating to ‘what, how and for whom to produce’ are taken with a view to maximizing profits.

In a centrally planned economy, decisions relating to ‘what, how and for whom to produce’ are taken by some central authority of the government.

All decisions are taken to maximise social welfare, not to maximise profits. Those goods and services will be produced which the central authority (or the government) finds as most useful for the society. That technique of production will be adopted which is socially most desirable.

In a situation of mass unemployment, for example, labour-intensive technology will be preferred (rather than capital-intensive technology) so that unemployment is reduced. Enough goods will be produced for poorer sections of the society even when production of such goods is not profitable. Social justice is given priority over profit maximization.

Briefly, in a centrally planned economy, the decisions relating to ‘what, how and for whom to produce’ are taken with a view to maximising social welfare.

Mixed economy shares the merits of market economies as well as centrally planned economies. Decisions regarding ‘what, how and for whom to produce’ are taken both to maximise profits as well as social welfare. In certain areas of production, producers are free to take their decisions with a view to maximising profits.

In certain other areas, decisions are taken entirely on the basis of social considerations. Example- In India, producers are free to produce cloth or steel to maximise their profits. But ‘railways’ are the monopoly of the government. The government provides transport services at nominal rates so that poorer sections of the society can avail them.

To illustrate and analyse the central problems, the economists use the technique of PPC (Production Possibility Curve), also called transformation curve or transformation line.

What is Production Possibility Curve (PPC)?

We shall reach the definition of PPC through an illustration.

We know, resources are limited and have alternative uses. Let us assume that the given resources (along with given technology) are used in the production of apples and wheat. 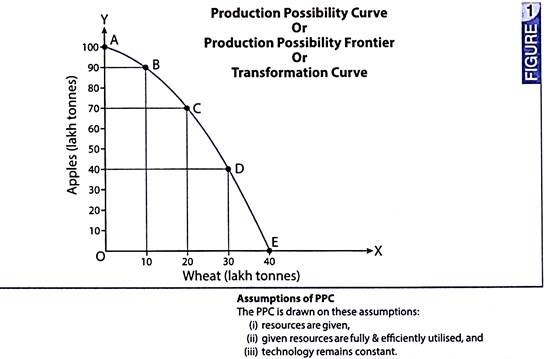 Quantity of wheat is shown on X-axis (horizontal axis) and quantity of apples is shown on Y-axis (vertical axis). Points A, B, C, D and E show different possibilities of production, with the given resources and technology. Joining all these points, we get AE curve. It is the production possibility curve.

We can now define production possibility curve as under:

Production possibility curve is a curve showing different possible combinations of two goods which can be produced with the available resources.

The construction of PPC is based on these assumptions –

(i) Resources are given,

(ii) Given resources are fully & efficiently utilised, and

In what follows, we illustrate the central problems using the concept of PPC: 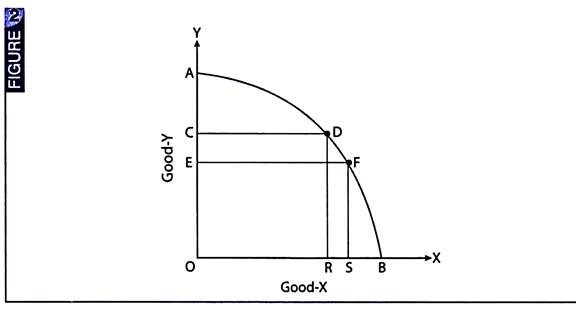 While illustrating the problem of what to produce, PPC offers some useful related information, as under:

(i) PPC helps identify attainable and non-attainable combinations output. This is illustrated through Fig. 3. 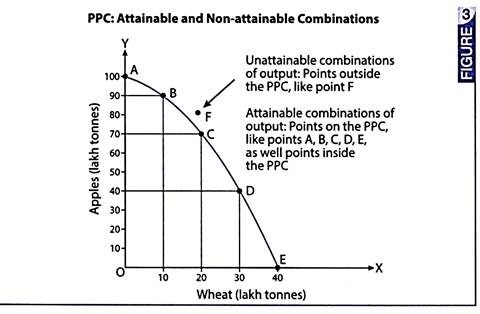 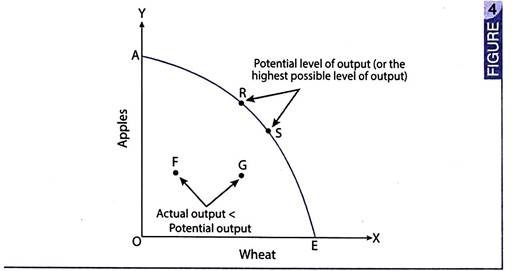 Actual Output = Potential Output, if the economy is operating on the PPC (points R and S, in the Fig. 4).

(iii) PCC helps identify the opportunity cost of shifting resources from use-1 to use-2. This is indicating by Fig. 5. 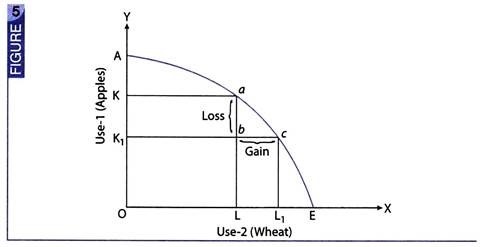 If some resources are shifted from Use-1 to Use-2, the gain of output of wheat = bc, while the loss of output of apples = ab. ab (loss) is the opportunity cost of bc (gain).

The problem of how to produce relates to choice of technique. This problem is particularly serious in underdeveloped economies, facing a difficult choice between conventional technology (labour-intensive but less efficient) and modern technology (capital-intensive and more efficient).

A shift from conventional to modern technology would lead to a shift in PPC, but not without adding to the problem of unemployment. Fig. 6 illustrates this situation. 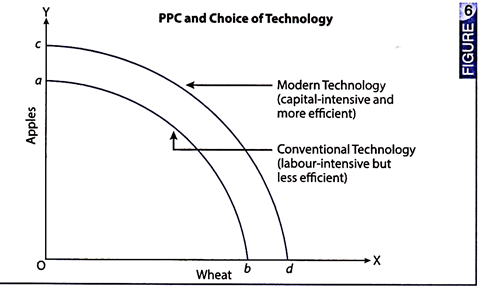 For whom to produce is the problem relating to the distribution of income. Skewed (unequal) distribution of income in favour of richer sections of the society would generate more surpluses (savings) for further investment. Accordingly, PPC would shift to the right, but poorer sections of the society would suffer deprivation. Fig. 7 illustrates this point. 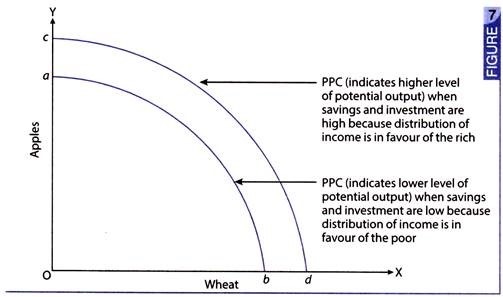 If a country focuses on growth without caring for ‘equality’ (equal distribution of income), it may succeed in shifting from ab to cd. However, economic divide would rise which may lead to social unrest.

(4) PPC and Underutilization of Resources:

In underdeveloped economies, resources are underutilised or are inefficiently utilised. PPC illustrates this situation, as in Fig. 8. 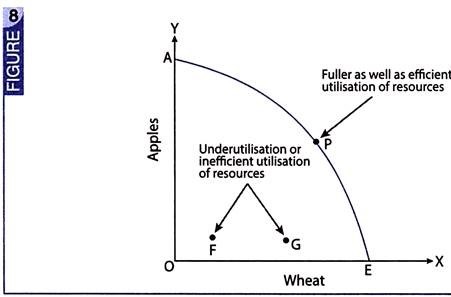 Any point on AE (like point P) corresponds to fuller as well as efficient utilisation of resources. It shows the potential level of output in the economy.

Any point inside AE (like point F or G) corresponds to –

(5) PPC and Growth of Resources:

Growth/Discovery of resources would lead to growth of potential output. Fig. 9 illustrates this situation. 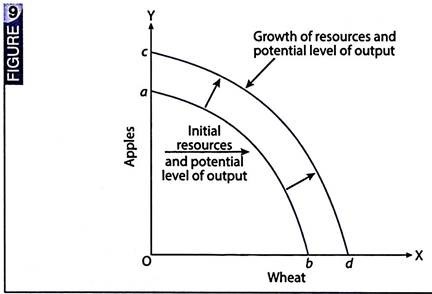 Clean India Mission impacts the quality of resources. Over time the quality of labour force is likely to improve. Accordingly, PPC would shift to the right. (See Ability Zone for further details.)

What is Opportunity Cost?

Let us begin with an illustration:

It refers to total loss of output when the given resources are shifted from Use-1 (Opportunity-1) to Use-2 (Opportunity-2).

It refers to opportunity cost per unit of additional output of Crop-2 when some resources are shifted from one opportunity to the other (from Crop-1 to Crop-2). 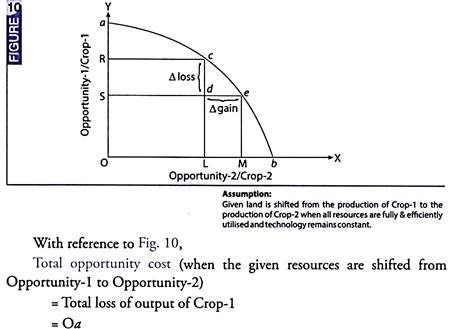 (i) Marginal opportunity cost is the ratio between loss of output and gain of output when some resources are shifted from Use-1 to Use-2.

(ii) Marginal opportunity cost indicates the cost of one more unit of output (or an additional unit of output) when some resources are shifted from Use-1 to Use-2.

(i) Total opportunity cost is not the ratio. It refers to total loss of output when some resources are shifted from Use-1 to Use-2.

(ii) Total opportunity cost indicates the cost of all the units produced when some resources are shifted from Use-1 to Use-2.

(i) It slopes downward from left to right, and

(ii) It is concave to the point of origin.

Why PPC is Concave to the Origin?

(i) When a curve is concave to the origin, it means that it has an increasing slope, as we move along this curve, from left to right.

Accordingly, it is concluded that PPC is concave to the origin, because as more and more resources are shifted from Opportunity-1 to Opportunity-2, marginal opportunity cost tends to rise.

Why does Marginal Opportunity Cost (or MRT) tend to rise?

Let us take an illustration:

Let us assume that entire farming land in an island is used for the production of coconuts. Simply because it is best suited for this crop. For their staple food (say rice), the people of this island are dependent on imports. Over time, the import of rice becomes difficult. Accordingly, the people of the island decide to produce some rice in their own island.

Now, there is a need to grow more rice. It would compel the farmers to shift more land from coconuts to rice. Now, land which is more fertile for the production of coconuts has to be used (because the less fertile has already been used). Accordingly, when another 10 hectares are shifted from coconuts to rice, loss of output must be higher than before.

Now, the answer to the question (why marginal opportunity cost tends to rise) may be given as under:

Answer to the following question should clarify this point further:

An economy produces tow goods- Maggi and Pasta. The following table summarizes its production possibilities. Calculate the marginal opportunity cost of producing more pasta in place of maggi at various combinations. What does it indicate? Draw the Production Possibility Curve. What is the shape of the curve? 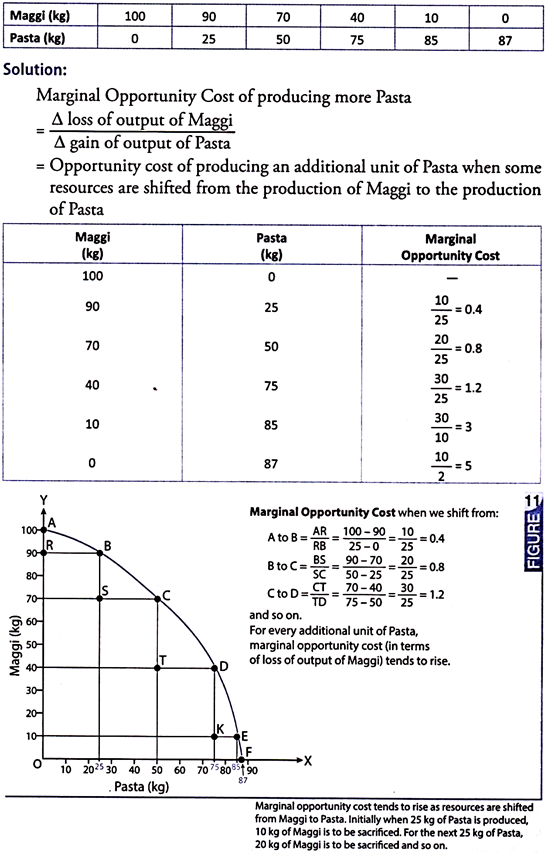 The curve (Fig. 11) is downward sloping and concave to the origin. The rising opportunity cost reflects that as more and more Maggi (kg) is sacrificed for additional Pasta, the in terms of Maggi (kg) per unit of Pasta (in kg) produced rises.