Introduction to the Circular Flow of Economic Activity:

The all pervasive economic problem is that of scarcity which is solved by three institutions (or decision-making agents) of an economy. They are households (or individuals), firms and government. They are actively engaged in three economic activities of production, consumption and exchange of goods and services. These decision-makers act and react in such a manner that all economic activities move in a circular flow.

First, we discuss their nature and role in decision-making.

Households are consumers. They may be single-individuals or group of consumers taking a joint decision regarding consumption. They may also be families. Their ultimate aim is to satisfy the wants of their members with their limited budgets.

Households are the owners of factors of production—land, labour, capital and entrepreneurial ability. They sell the services of these factors and receive income in return in the form of rent, wages, and interest and profit respectively.

The term ‘firm’ includes joint stock companies like DCM, TISCO etc., public enterprises like IOC, STC, etc., partnership concerns, cooperative societies, and even small and big trading shops which do not manufacture the commodities they sell.

The government plays a key role in all types of economic systems—capitalist, socialist and mixed. In a capitalist economy, the government does not interfere. It simply establishes and protects property rights. It sets standards for weights and measures, and the monetary system.

In a socialist economy, the role of the government is very extensive. It owns and regulates the entire production and consumption processes of the economy, and fixes prices of goods and services. In a mixed economy, the government strengthens the market system.

It removes its defects by regulating the activities of the private sector and by providing incentives to it. The government also uses resources to produce goods and services itself which are sold to households and firms. These decision-making agents take economic decisions to produce goods and services and to exchange them in order to consume them for satisfying the wants of the whole economy.

In other words, production is a means (beginning) and consumption is the end of all economic activities. Both production and consumption, in turn, depend upon exchange. Thus these two flows are interrelated and interdependent through exchange.

The Circular Flow in a Two-Sector Economy:

Consumers and firms have a dual role, and exchange with one another in two distinct ways: 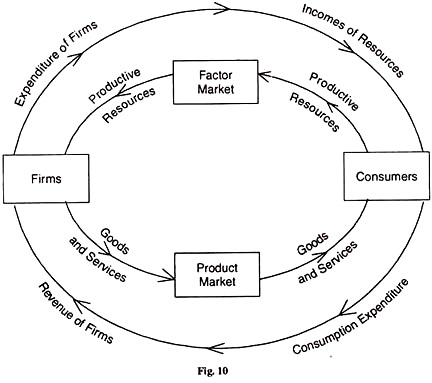 (1) Consumers or households own all the factors of production, that is, land, labour, capital and entrepreneurship, which are also called productive resources. They sell them to firms for producing goods and services.

In the diagram, the sale of goods and services by firms to consumers in the product market is shown in the lower portion of the inner circle from left to right; and the sale of their services to firms by households or consumers in the factor market is shown in the upper portion of the inner circle from right to left. These are the real flows of goods and services from firms to consumers which are linked with productive resources from consumers to firms through the medium of exchange or barter.

(2) In a modem economy, exchange takes place through financial flows which move in the reverse direction to the “real” flows. The purchase of goods and services in the product market by consumers is their consumption expenditure which becomes the revenue of the firms and is shown in the outer circle of the lower portion from right to left in the diagram.

The expenditure of firms in buying productive resources in the factor market from the consumers becomes the incomes of households, which is shown in the outer circle of the upper portion from left to right in the diagram.

The Circular Flow in a Three-Sector Economy:

So far we have been working on the circular flow of a two-sector model of an economy. To this we add the government sector so as to make it a three-sector closed model of circular flow of economic activity. For this, we add taxes and government purchases (or expenditure) in our presentation. 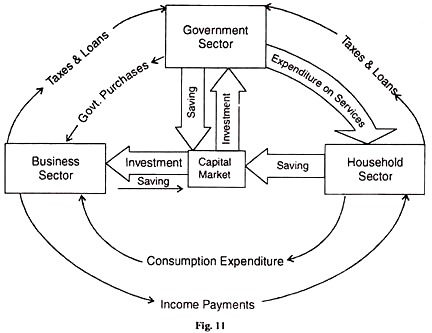 First, take the circular flow between the household sector and the government sector. Taxes in the form of personal income tax and commodity taxes paid by the household sector are outflows (or leakages) from the circular flow. But the government purchases the services of the households, makes transfer payments in the form of old age pensions, unemployment relief, sickness benefit, etc., and also spends on them to provide certain social services like education, health, housing, water, parks and other facilities.

On the other hand, the government purchases all its requirements of goods of all types from the business sector, gives subsidies and makes transfer payments to firms in order to encourage their production. These government expenditures are injections into the circular flow.

On the other hand, taxes on business firms tend to reduce their investment and production. The government offsets these leakages by making purchases from the business sector and buying services of the household sector equal to the amount of taxes. Thus inflows (injections) equal outflows (leakages) in the circular flow.

If government purchase exceeds net taxes then the government will incur a deficit equal to the difference between the two, i.e., government expenditure and taxes. The government finances its deficit by borrowing from the capital market which receives funds from the household sector in the form of saving.

On the other hand, if net taxes exceed government purchases the government will have a budget surplus. In this case, the government reduces the public debt and supplies funds to the capital market which are received by the business sector.

The Circular Flow in a Four-Sector Economy:

They are expenditure s incurred by the household sector to purchase goods from foreign countries. These exports and imports in the circular flow are shown in Figure 12. 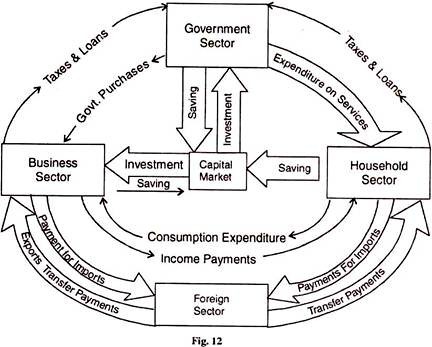 On the other hand, the business sector exports goods to foreign countries and its receipts are an injection in the circular flow or money. Similarly, there are many services rendered by business firms to foreign countries such as shipping, insurance, banking, etc. for which they receive payments from abroad.

They also receive royalties, interests, dividends, profits, etc. for investments made in foreign countries. On the other hand, the business sector makes payments to the foreign sector for imports о capital goods, machinery, raw materials, consumer goods, and services from abroad. These are the leakages from the circular flow of money.

Like the business sector, modern governments also export and import goods and services, and lend to and borrow from foreign countries. For all exports of goods, the government receives payments from abroad.

Similarly, the government receives payments from foreigners when they visit the country as tourists and for receiving education, etc., and also when the government provides shipping, insurance and banking services to foreigners through the state-owned agencies.

It also receives royalties, interests, dividends, etc. for investments made abroad. These are injections into the circular flow of money. On the other hand, the leakages are payments made to foreigners for the purchase of goods and services.

Further, imports, exports and transfer payments have been shown to arise from the three domestic sectors—the household, the business and the government. These outflows and inflows ass through the foreign sector which is also called the “Balance of Payments Sectors”.