Symbolically, we may rewrite the formula:

It should be noted that a minus sign (-) is generally inserted in the formula before the fraction with a view to making the coefficient of elasticity a non-negative value.

The price elasticity can be measured between two finite points on a demand curve (called arc elasticity) or on a point (called point elasticity).

The elasticity coefficient can be calculated with the help of the following formula: 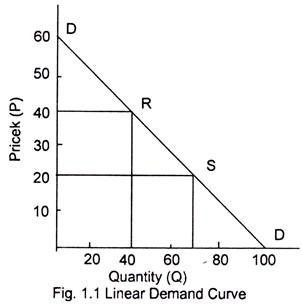 These values can be put in the formula so that:

This implies that a one percent fall in price of commodity X causes a 1.5 per cent increase in demand for it.

The coefficient will be different while moving upward from point S to R (increase in price from Rs. 20 to 40 and quantity demanded is reduced from 70 to 40 units giving an elasticity coefficient of – 0.42 implying that one per cent increase in price will reduce the quantity by 0.42 percent. Thus the elasticity depends on the direction of change in price. Therefore, measuring elasticity through arc method, the direction of price change should be kept in mind.

The way out of this difficulty is to take an average of prices and quantities and thus to measure elasticity at the midpoint of the arc.

The formula then becomes:

Although the ½ cancels out in the formula, it is put there to stress the fact that by using the average values of the quantities and prices, the elasticity coefficient is the same whether price goes up or goes down.

Let us take a point such as R on the demand curve DD. For measuring elasticity at a point the following formula may be used. 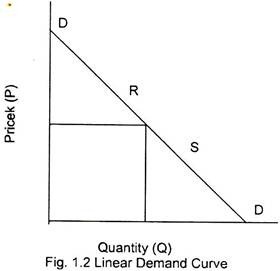 If we substitute these values in equation 1.8, what we get is

If the numerical values for QD and OQ are available, elasticity at point R can be calculated.

Price Elasticity at Different Points on a Non-Linear Demand Curve: 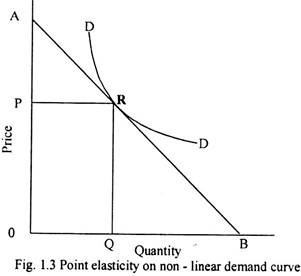 One important application of elasticity is to clarify whether a price increase will raise or lower total revenue. Many business executives are concerned with the issue whether it is worthwhile to raise prices and whether the higher prices make up for lower demand.

If we know the price elasticity of demand, we may know what will happen to total revenue when price changes:

(1) If price elasticity (ep > 1), reducing the price will increase the total revenue.

(2) When demand is perfectly inelastic ep = 0, there is no decrease in quantity demanded when price is raised. Therefore, a rise in price increases the total revenue and vice versa.

To make this point more clear, we require total and marginal revenue function and price-elasticity of demand.

The MR is then

It can be seen from the figure 1.4 that if the demand curve is falling the TR curve initially increases, reaches a maximum, and then starts declining. The derived relationship between MR, P and e can be used to establish the shape of the total- revenue curve.

The total revenue curve reaches its maximum level at the point where ep = 1, because at this point its slope, the marginal revenue, is equal to zero.

If ep >1 the total revenue curve has a positive slope. It is still increasing and has not reached its maximum point. If ep <1 the total-revenue has a negative slope and is falling. 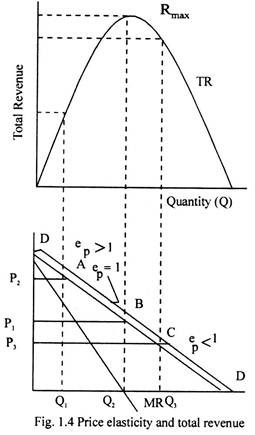 The following can be summarized:

3. If ep = 1, the demand is unitary elastic, total revenue is not affected by changes in price because MR has reached zero.

Demand and marginal revenue curves show where demand is elastic, unitary elastic and inelastic. It is clear that demand becomes less elastic at lower prices. This is a characteristic of linear demand curves because the curve is linear dQ/dP is a constant. Thus price elasticity is determined by the value of P/Q. But as price decreases, P/Q also decreases. 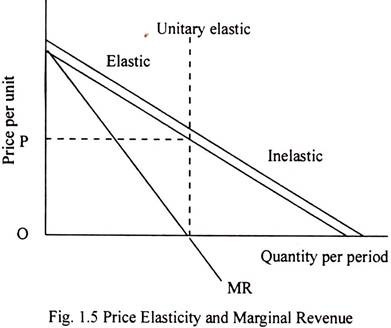 The responsiveness of quantity demanded to changes in income is called income elasticity of demand. With income elasticity, consumer incomes vary while tastes, the commodity’s own price, and the other prices are held constant.

The income elasticity of demand for a good or service may be calculated by the formula:

where- ey stands for the coefficient of income elasticity, Y for income.

The degree of income elasticity varies in accordance with the nature of commodities:

1. In case of all normal goods, the income elasticity is positive

2. For essential goods, the income elasticity is less than one. This means that quantity demanded increases less than proportionately as income increases. Soap, salt, match, newspapers have low income- elasticity of demand.

3. For goods of comfort, the income-elasticity coefficient is equal to unit which results in proportionate change in quantity demand.

4. Luxury goods have income elasticity greater than unity implying more than proportionate change in quantity demanded. Jewelry, automobiles are goods of this category.

Income elasticity of demand can be useful in the following business decisions:

1. Income-elasticity can be helpful in production planning and management in the long run, particularly during the period of business cycle.

2. It can be used for demand forecasting with given rate of increase in income.

The income elasticity of demand measures the degree of responsiveness of physical quantities of consumption of a good as income changes. If we measure consumption by consumer expenditures rather than by physical quantities of a good, the phenomena may be described as income sensitivity. An income- sensitivity may be defined as the percentage change in expenditures on a good divided by the percentage change in income of the consumers.

The income sensitivity may be measured with the help of following formula:

Suppose a 10 percent increase in income causes consumer expenditure on a good to increase by 12 percent, the income sensitivity of that good is 1.2.

Cross elasticity is used to classify the relationship between goods. If cross elasticity is greater than zero, an increase in the price of y causes an increase in the quantity demanded of x, and the two products are said to be substitutes. When the cross- elasticity is greater than zero, the goods or services involved are classified as complements Increases in the price of y reduces the quantity demanded of that product. Diminished demand for y causes a reduced demand for x. Bread and butter, cars and tires, and computers and computer programs are examples of pairs of goods that are complements.

The coefficient is positive if A and B are substitutes because the price change and the quantity change are in the same direction. The coefficient is negative if A and B are complements, because changes in the price of one commodity cause opposite changes in the quantity demanded of the other. Other things such as consumer taste for both commodities, consumer incomes and the price of the other commodity are held constant.

Many companies produce several related products. Where a company’s products are related, the pricing of one good can influence the demand for other products. Gillette makes both razors and razor blades. Ford sells several competing makes of automobiles. Gillette probably will sell more razor blades if it lowers the price of its razors.

Advertising elasticity may be measured by the following formula:

3. Cumulative Effect of Past Advertisement:

Change in product’s price, consumer’s income, increase in the number of substitutes and their prices are other factors that influence the advertising elasticity of a product.

If ex > 1 Buyers expect that future prices will rise by a larger percentage than current prices.

ex = 1 Buyers expect that future prices will rise by the same percentage as current prices.

ex < 1 Buyers expect that future prices will rise by a smaller percentage than current prices.

ex < 0 Buyers expect that current rise will be followed by a fall in future prices.

The concept of elasticity of price-expectation is very useful in formulating pricing policy.

Economics, Goods, Demand, Elasticity, How to, Measure the Elasticity of Demand