In this article we will discuss about the formula for calculating the arc elasticity of demand. 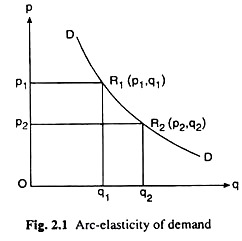 Now if the price decreases by a consid­erable amount from p1 to p2, the demand for the good in­creases from q1to q2 at the point R2. The elasticity of demand that is obtained in the case of this price change is called the arc-elasticity of demand—here over the arc R1R2 of the demand curve.

It should be remembered here that if our initial point is R2 (p2, q2) and if, after a rise in price from p2 to p1, come to the point R1 (p1, q1), then the arc-elasticity of demand—now over the arc R2R1 is obtained. Since the two arcs, viz., R1R2 and R2R1, over the demand curve are identical, the arc-elasticities in these two cases would also be the same.

Therefore, the coefficient of arc-elasticity of demand over the arc R1R2 or R2R1would be: