Full employment equilibrium refers to the equilibrium where all resources in the economy are fully utilised (employed).

Aggregate demand is just sufficient to ensure full utilisation of all available resources. It also indicates that in such a situation aggregate demand is neither in excess nor deficient but equal to supply at ‘full employment level’. It is just equal to what it should be. This is an ideal situation which every economy desires to achieve and ensures its continued existence. 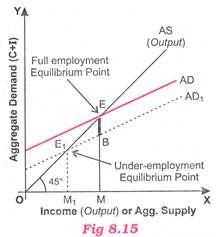